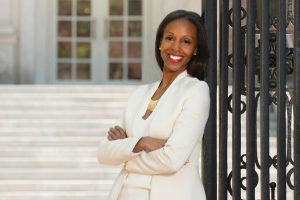 The Department of Art & Art History welcomes Dr. Sarah Elizabeth Lewis as the College of Arts + Architecture's 2022 Distinguished Lecturer. A reception will follow.

Dr. Lewis will speak about creativity in her lecture, "The Rise." This event is FREE, but resgistration is required. Please use this link to register for this event.

Sarah Elizabeth Lewis is an associate professor of history of art and architecture and African and African American studies at Harvard University and the founder of The Vision & Justice Project. Her research focuses on the intersection of visual representation, racial justice, and democracy in the United States from the 19th century through the present. Her books and edited volumes include The Rise, translated into seven languages, Carrie Mae Weems, which won the 2021 Photography Network Book Prize, and “Vision & Justice” by Aperture magazine which received the 2017 Infinity Award for Critical Writing and Research from the International Center of Photography. In 2019, Lewis received the Freedom Scholar Award, presented by The Association for the Study of African American Life and History for her body of work and its “direct positive impact on the life of African-Americans.” She was named an Andrew Carnegie Fellow in 2022.

Her forthcoming publications include Caucasian War: How Race Changed Sight in America (Harvard University Press, 2023), Vision & Justice (One World/Random House, 2024), and Groundwork: Race and Aesthetics in the Era of Stand Your Ground Law (Spring 2023). The article on which Groundwork is based, published in Art Journal (Winter 2020), won the 2022 Arthur Danto/ASA Prize from the American Philosophical Association for “the best paper in the field of aesthetics, broadly understood.” A frequent speaker at universities and conferences, including TED and SXSWedu, she has had op-eds, commentary, and profiles of her work published in outlets including The New York Times, Aperture, The New York Review of Books, The New Yorker, The Atlantic, and The Boston Globe.

Lewis’s research has received fellowship and grant support from the Ford Foundation, the Hutchins Center for African & African American Research at Harvard University, the Gilder Lehrman Center for the Study of Slavery, Resistance, and Abolition, the Whiting Foundation, the Lambent Foundation, and the Dorothy and Lewis B. Cullman Center for Scholars and Writers at the New York Public Library.

Before joining the faculty at Harvard, she held curatorial positions at The Museum of Modern Art, New York and the Tate Modern, London. She also served as a Critic at Yale University School of Art. Lewis currently serves on the boards of Thames & Hudson Inc., Creative Time, Harvard Design Press, and Civil War History journal, and is a member of the Yale University Honorary Degrees Committee. Her past board service includes the Andy Warhol Foundation of the Visual Arts, The Brearley School, and The CUNY Graduate Center. She received her bachelor’s degree from Harvard University, an M. Phil from Oxford University, an M.A. from Courtauld Institute of Art, and her Ph.D. from Yale University. She lives in New York City and Cambridge, MA.