Gretchen is a member of AGA Collaborative with Amanda Hamp (Assistant Professor, University of New Mexico) and Alison Bory (Associate Professor, Davidson College.) AGA Collaborative is a research and performance platform committed to the rigorous exploration of collaboration. Our collaborative prioritizes process — of dancemaking, of research — and de-centers authorship in favor of a focus on relationships. We approach choreography as practice-based research — investigations into the experience of being, what the language of the body can communicate, and how bodies on stage can speak to the world.

Each of our projects responds to thematic concerns or areas of interest. Current research questions we are considering include: How do ethics shape our collaborative process? How do ideas of accomplishment and productivity structure our lives? How can we use our platform to make room for more voices? 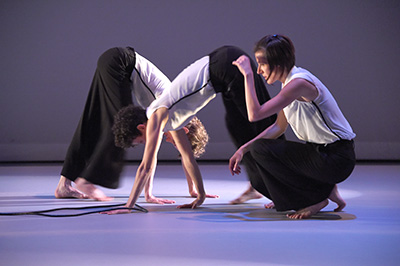 Recent writing projects have included an article on our collaborative methods, published in the journal Choreographic Practices (2018), and an article addressing how our collaboration challenges the myth of the sole genius, forthcoming from the journal Performing Ethos: International Journal of Ethics in Theatre and Performance. In our choreography, we are dedicated to investigating different ways of thinking about and viewing dancing bodies on stage. Prioritizing intimacy and connection over experiences of diversion or spectacle, we aim to create compositions that allow for audience reflection and reflexivity. We approach the stage as a multidimensional space and a site for community building — amongst ourselves and with everyone in the room.

To learn more about our work and view videos and images, please visit our website: www.agacollaborative.org. 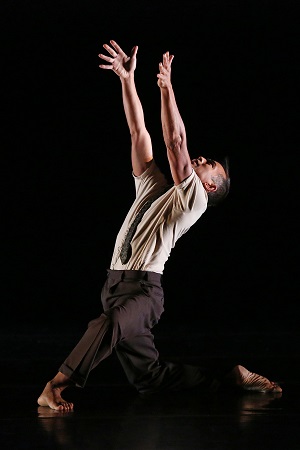 Balcos actively pursues investigations in somatic movement education as it applies to all areas of movement exploration, expression, and holistic living. Somatic movement education focuses on the active awareness of human life processes, the intelligence of the body, and its ability to learn, and re-pattern compensations and mis-alignments. This promotes efficient moving both in dance and with day-to-day functional movement and holisitic embodied living and being. With dance, exploration will begin with awareness of breath, proprioception and kinesthesia.  Along with this research, Balcos is active in exploring continued investigations in choreography and dance performance. His collaborations with composers and musicians create interdisciplinary performances including new choreography, improvisation, and contact improvisation.

Professor Ann Dils’s current project is a book about dance in Manhattan in the 1930s, focusing on vernacular dance as integral to ethnic identity and community stability and support during the Depression. Existing research regarding dance in the 1930s emphasizes modern dance as a means of social protest; the vibrant dancing of Lindy Hoppers at the Savoy; or dance marathons during which exhausted participants vied for prize money over long hours of dancing. To these understandings, Dils hopes to contribute little-known histories like that of New York’s resident Chinese opera, and information about large public events in which hundreds or thousands of dancers and spectators celebrated and shared dance styles from home countries. Among her resources are Folk-News newsletters, published throughout the 1930s by New York City’s Folk Festival Council, currently held at the Jerome Robbins Dance Division, New York Public Library for the Performing Arts; maps of ethnic neighborhoods that are part of 1930s urban planning studies; and library holdings such as those of New York University’s Archives of Irish America. She will teach an honors course based on this research beginning Spring 2023.

Dils has also written about choreographers Bill T Jones and Doris Humphrey and contributed to sources supporting the pedagogy of dance studies. With Ann Cooper Albright, Dils co-directed Accelerated Motion: Towards a New Dance Literacy, a National Endowment for the Arts-funded digital collection of materials about dance, and co-edited 2001 Moving History/ Dancing Cultures: A Dance History Reader. Her work can be found in edited collections and scholarly journals, especially Dance Research Journal.

During 2016-17, Associate Professor Kim Jones and the UNC Charlotte Department of Dance investigated the work of celebrated choreographer Paul Taylor. 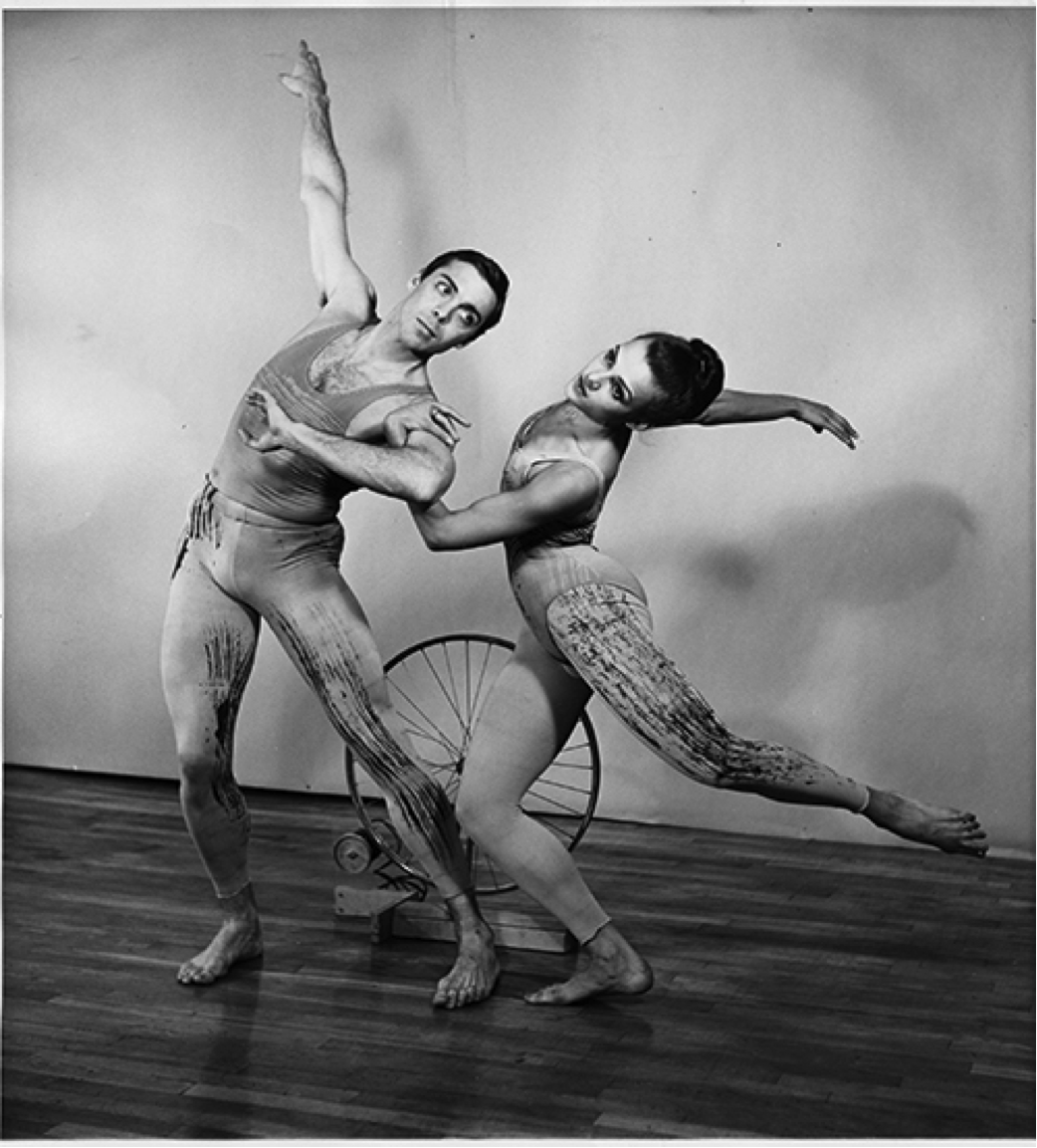 Renowned modern dance choreographer Paul Taylor gave Jones the unique opportunity to reconstruct a seminal early work not performed or seen in more than 50 years. Tracer, choreographed by Taylor in 1962 with set and costumes by the artist Robert Rauschenberg, does not benefit from the existence of video or audio rehearsal or performance records. Jones completed her scholarly reconstruction in September 2016 during a three-week residency at UNC Charlotte with the Taylor 2 Dance Company. During the residency, Jones, in close consultation with former Taylor dancers Liz Walton, Tom Patrick, and Ruth Andrien (Taylor 2 Rehearsal Director), set Tracer on the Taylor 2 dancers, working also with UNC Charlotte dance students, who learned the work for performance demonstrations. The Taylor 2 Dance Company premiered the reconstructed Tracer, with a new Rauschenberg-inspired sculpture by artist Jeff Crawford, in a performance at UNC Charlotte on September 30, 2016.

UNC Charlotte Dance received a 2016 Art Works grant from the National Endowment for the Arts (NEA) to support this work. The Art Works category supports the creation of work and presentation of both new and existing work, lifelong learning in the arts, and public engagement with the arts through 13 arts disciplines or fields. UNC Charlotte was one of 12 grant recipients in North Carolina and the state's only grant recipient in the "dance" category. “The arts are all around us, enhancing our lives in ways both subtle and obvious, expected and unexpected,” said NEA Chairman Jane Chu. “Supporting projects like the one from UNC Charlotte Department of Dance offers more opportunities to engage in the arts every day.” Read a New York Times article about her process.

Tracer was set on Taylor 2 Dance Company members, who performed it at UNC Charlotte on September 30, 2016, and again in New York City at the 92nd Street Y on December 16, 2016, where it was reviewed by New York Times chief dance critic Alastair Macaulay. Tracer has been accepted into the Taylor 2 Dance Company repertory and continues to receives further performances, including performances in June 2022 at the Joyce Theater.

Jones's newest research project is an investigation into the choreography of Korean dancer/choreographer Choi Seung-Hee (1911-69). Widely regarded as Korea’s first modern dancer, Choi lived an eventful life through the Japanese occupation of Korea and the Korean war. Jones began her study of Choi in 2019 and in June 2022 presented a work inspired by Choi at the DAP Festival in Italy. In July 2022 she joined a cohort of 25 higher education faculty in Chicago for the National Endowment for the Humanities (NEH) Summer Institute: Making Modernism: Literature, Dance, and Visual Culture in Chicago, 1893-1955, where she continued her research. Learn more here.

DanceNCommunity is an outreach project in South Asian dance forms across research, teaching, and service. It branches out of Dr. Kaustavi Sarkar’s research in community engagement. The project is a holistic attempt to engage with audiences, artists, educators, scholars, and community activists. It started as diasporic outreach in the Indian community residing in the United States and who are invested in South Asian arts practices. The project involves concert programming, informal sharing, community festivals, teaching, professional development opportunities for artists, standardized testing opportunities with India-based institutions, instituting an undergraduate fellowship in South Asian dance, and developing a journal through UNC Charlotte Open Journal Systems. The journal, South Asian Dance Intersections, is a progressive, scholarly, blind peer-reviewed, and open-access journal which seeks to publish a unique blend of original high-quality research in scholarly, choreographic, contemporary, community-building, and technical explorations within South Asian dance and its interdisciplinary intersections.

Past conferences for South Asian Dance practitioners that Kaus has attended include Shaping S-Curves: An online conference centering choreography in Odissi and Sensate Technicities: A Conversation Across Dance Cultures and Techniques: Odissi dancers from the US, UK, Canada, and India gathered for a conference. 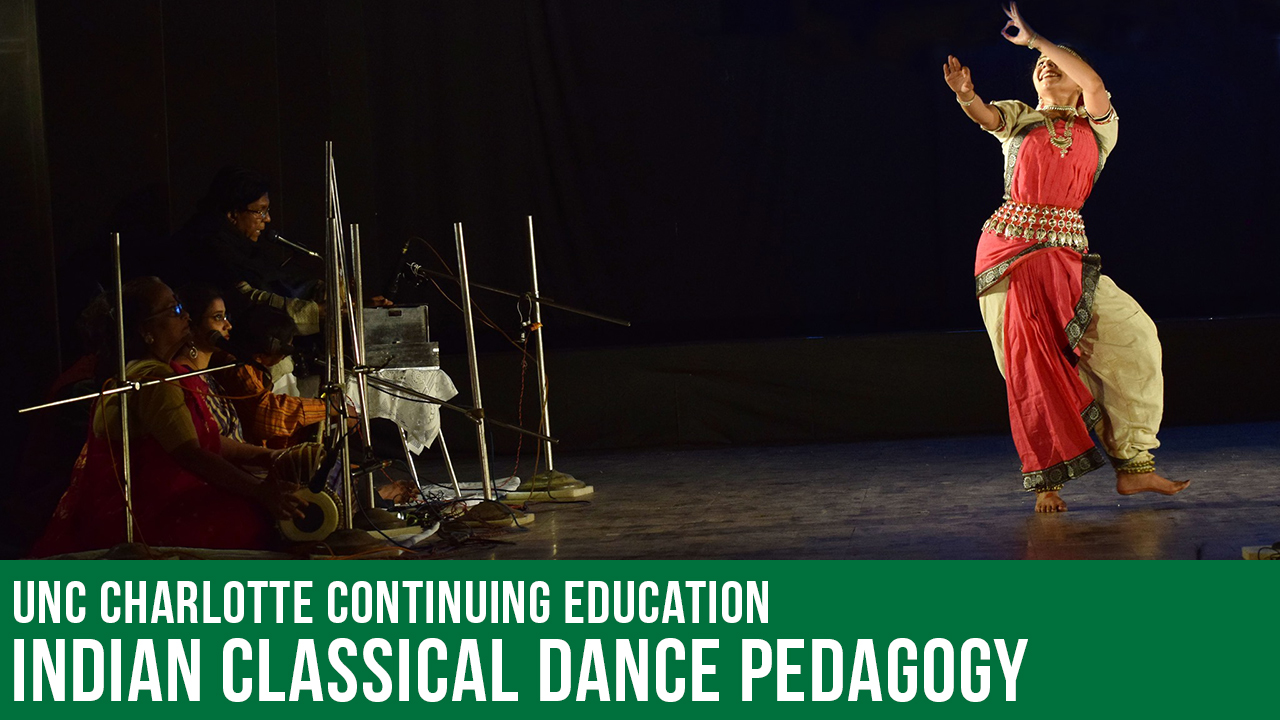 She also offers a continuing education course at Charlotte. Indian dance is a multiplicitous construct. It is a mosaic of infinite shades and possibilities across historical and contemporary contexts. This initiative by the Department of Dance at UNC Charlotte recognizes the plethora of Indian dance in the US diaspora. It offers a range of courses based on the heterogeneity of techniques, aesthetics, and pedagogies that characterize the landscape of Indian dance. Learn more about the Indian Classical Dance Pedagogy Certificate. 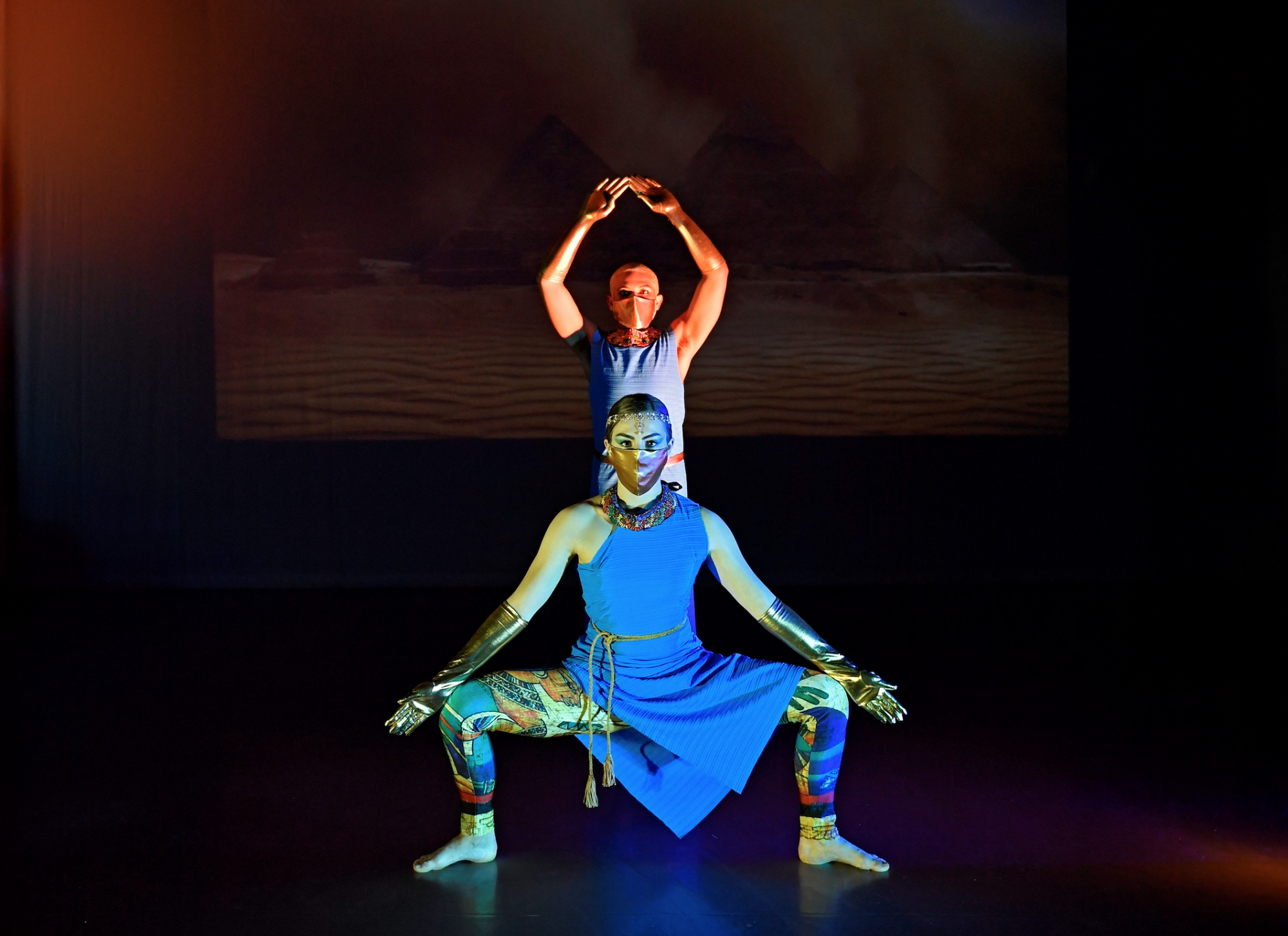 Delia Neil, professional choreographer and master teacher of ballet, has had a series of collaborations with the North Carolina Museum of Art (NCMA), Raleigh, NC. Most recent is a project in response to NCMA’s exhibition of the work of Art Nouveau visionary, Alphonse Mucha. Students performed at NCMA on December 5, 2021.

In April 2021, six UNC Charlotte dance students performed Neil’s, An Homage to Ancient Egypt, choreographed to accompany the museum’s exhibition, Golden Mummies of Egypt. In 2019, Neil took a group to Raleigh to perform her piece, Frida’s Faces, in conjunction with the NCMA’s exhibition of works by Frida Kahlo.

The next collaboration is a work in conjunction with the NCMA's exhibition of works from the Phillips Collection. Students will perform that piece at the museum in October 2022, with a repeated set of performances in Charlotte at the Bechtler Museum of Modern Art in November.

Neil is the coordinator of UNC Charlotte’s Professional Dance Training Certificate with Charlotte Ballet and a frequent presenter at CORPS de Ballet International conferences. She will also present at the upcoming Royal Academy of Dance conference, Mapping Dance and Dance Teaching: Past(s), Present, and Future(s). 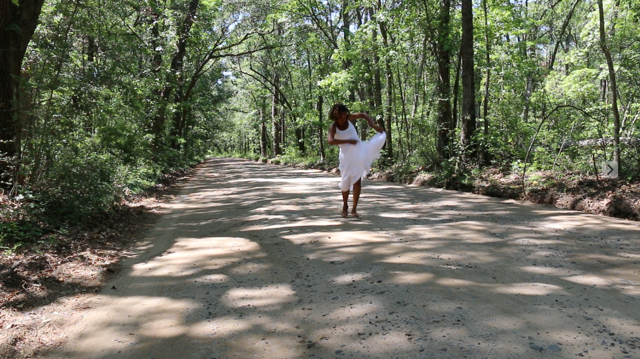 Tamara Williams’s research centers around the systematic investigation and analysis of spiritual dances of the African Diaspora. Her current work focuses on the history, movements/gestures/dances, songs, rhythms, context, environment and development of the African-based Ring Shout traditions created by the enslaved people in the Carolinas and Georgia. In an effort to preserve the original movement and gestures of the tradition, Williams is reconstructing the earliest recorded dances of the Ring Shout. She is creating a formulated dance technique that highlights authentic movements of Ring Shout stemming from the Yoruba, Angola and Akan cultures of West Africa. The movements brought to the United States by these West African cultures were infused together by the enslaved African Americans; a new culture of people. Through this process, Williams analyzes the similarities in the West African ancestral dances and compare them to the movements performed in the Ring Shout by African Americans of the seventeenth and eighteenth centuries. In 2017, Williams developed a course entitled, Reconstructing Ring Shout Traditions in which UNC Charlotte dance majors are able to learn Ring Shout movement vocabulary and its influence in American social and popular dances. Students also travel to Charleston, SC to study Ring Shout and Gullah culture and history.