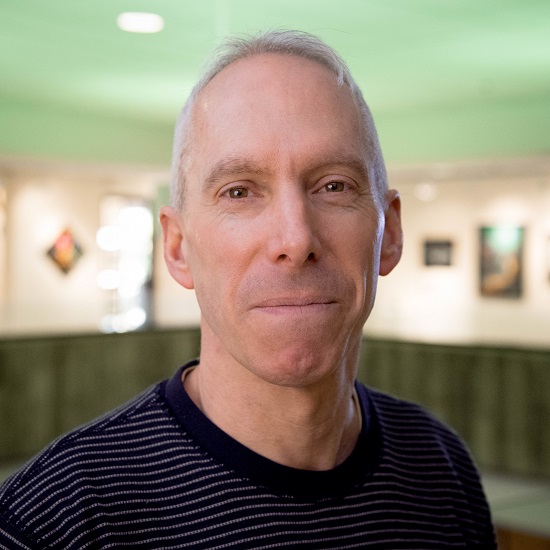 In 2019, Associate Professor of Art Jeff Murphy and his wife, Professor Heather Freeman, spent the month of July in residency at the Santa Fe Art Institute with their son Quinn. Murphy was just beginning to explore virtual reality (VR) video and every day he would walk along the Santa Fe River and immerse his new Go Pro Fusion camera in the water. But as the month progressed, the water dried up, and by the end of July, the river had disappeared.

“It really was a great metaphor for the issues that surround global warming and climate change,” he says.

Murphy’s work began to explore environmental concerns in the early 2010s. He had always enjoyed outdoor life – hiking, kayaking, mountain biking – but as the father of a small boy, he spent a lot of time in nature.

“Quinn loved being outside. We spent so much time in the creek on our property.” Protecting the land became important, Murphy says. “As an artist you have to find a way to have your creative work reflect your life and vice-versa. As a parent, you address things that you think are relevant to your child’s future.”

Before that time, much of Murphy’s work had focused on themes of religious identity. He grew up in a Catholic home and attended Catholic school in a suburb of Dayton, Ohio. There were no artists in his family, and he didn’t take a formal art class until he was a student at The Ohio State University.

“I took a photography class and then just kept doing it. My instructors just assumed I was a photography major.” When they discovered otherwise, they convinced him to pursue the Bachelor of Fine Arts in Photography, Film, and Video.

Ohio State was one of the first programs to teach animation, through the Advanced Computing Center for the Arts and Design, and that training served Murphy well in his first job out of undergraduate school, with a business communications company. A few years later, he entered graduate school at the University of Florida, right as digital media was exploding. When he graduated in 1995 with his Master of Fine Arts, he had studied interactive design and digital photography and, inspired by professor Jerry Uelsmann, had embraced photomontage/composite photographs. 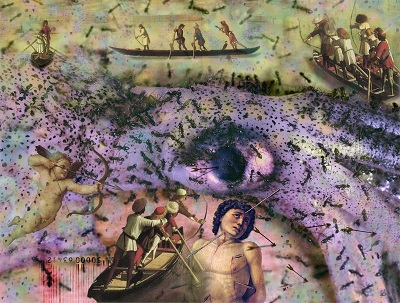 Murphy’s master’s thesis, the first works in his Bible Stories ("Giant Squid," 1995, pictured right), launched his artistic investigation into religion, a thematic journey that lasted more than a decade and culminated in a research semester in Spain in 2006. From that research, he developed Convergence, an extensive body of work that examines the visual dynamic created by both the Islamic and Christian traditions in Andalusia.

That same year, the Department of Art & Art History, which Murphy had joined in 1998, hired a second digital media professor: Heather Freeman. Freeman and Murphy had met on an online dating site four years before and then in person at a College Art Association conference in 2003. At the time, Freeman was teaching at the University of Kentucky in Lexington, but over the next few years, she and Murphy began to look for teaching positions in closer proximity. Freeman landed a job first at Clemson University. Then a position opened at UNC Charlotte. While Murphy was completing his artist residency in Spain, UNC Charlotte hired Freeman. The two were married that July. 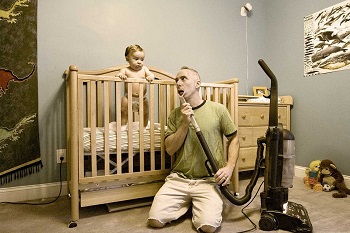 Quinn was born in 2008, and fatherhood has profoundly affected Murphy’s life and work, from videos like Building Your Vocabulary, to the 2D photographic Happy SAHD (Stay at Home Dad) series (pictured left), to a series of 360 Degree Panoramas inspired by Quinn’s fascination with digging in the dirt.

He continues, too, to ride the crest of the digital wave. He recently acquired an Oculus VR headset and is reworking videos to be viewed with the new technology.

And especially with the pandemic, he is still spending a lot of time outdoors. Now 12, Quinn doesn’t need constant supervision on walks along the creek, but Barley, the family’s Boxer mix, is a happy companion. “I have my dog working for me,” Murphy says. “I just strap my camera to her back, and off we go.”