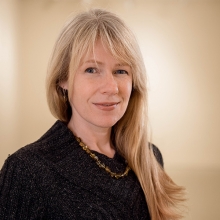 Heather D. Freeman is a Professor of Digital Media in the Department of Art & Art History. She holds a BA in Fine Art and German Studies from Oberlin College (1997), an MFA in Studio Art from Rutgers University (2000), and has taught at UNC Charlotte since 2006. Previously, Freeman worked as an art director, graphic designer, editor, and animator in New York and New Jersey. She has also taught art, graphic design, and visual rhetoric since 2001 at Allegheny College, The University of Kentucky, and Clemson University. Freeman has created work and taught classes in digital print, 2D and 3D animation, 3D modeling, video art, digital fabrication, mobile app design, game design, and digital collage since 2001. She is also the author of The Moving Image Workshop: Introducing animation, motion graphics and visual effects in 45 practical projects, published by Fairchild Press, an imprint of Bloomsbury Academic. Regardless of media, Freeman's artworks combine traditional and digital technologies to weave together the symbolic forms of science, mythology, and popular culture. Her animations and films have screened internationally and won numerous awards, while her prints and mixed media works have appeared in group and solo shows around the country. Visit her website to learn more about her work.