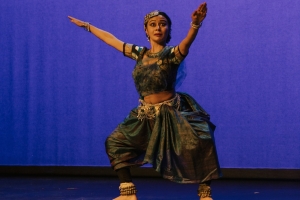 Wednesday, January 11, 2023
Professor Kaustavi Sarkar will work with Maya Kulkarni to bring together Odissi and Bharatnatyam.

Dr. Kaustavi Sarkar, assistant professor of dance, has received a $10,000 “Grant for Arts Projects - Dance” from the National Endowment for the Arts (NEA). Sarkar’s project, “ShilpaNatyam: Creating a New Vocabulary in Indian Dance,” is in partnership with New York-based choreographer Dr. Maya Kulkarni.

"Shilpa-Natanam" means mobilizing visual art. This is a creative process developed by Kulkarni over the past decade in which she draws inspiration from painting, sculpture, literature, and aesthetics to create dancic texts embedded within the dramatic South Asian tradition of Abhinaya, or expressive dancing. For this project, Sarkar and Kulkarni are working together to build bridges and integrate elements of two very distinct Indian dance techniques, Odissi from eastern India and Bharatnatyam from southern India. Combining elements from each prominent dance form will create a new choreographic language that will spark conversations and prompt participants and audiences to, as the grant abstract says, “consider the premise and context of intercultural artistic creation towards a broader discourse on cultural difference.”

The project will consist of two elements: residencies and performances. Kulkarni will travel to Charlotte for two ten-day residencies, one in Spring 2023 and one in Fall 2023. During those residencies, she will host community and university-based masterclasses, performances, public discussions, and several symposia. The second part of the project is the creation of an evening-length performance consisting of four pieces: two solos and two ensemble works. Performances will take place across the U.S. and India in the Summer of 2024.

Sarkar, an Odissi dancer/choreographer, first met Kulkarni, a Bharatnatyam dancer/choreographer, in 2020 over Zoom while seeking feedback for a project she was working on with another choreographer, Dr. Rohini Dandavate. Shortly after that, Sarkar and Kulkarni began working together as choreographers on a project called "Tridha: Three Parables," which was performed in the 2021 Faculty Dance Concert at UNC Charlotte. Sarkar and Kulkarni's work across live performance and film has received positive reviews and presented in dance festivals in New York and New Jersey. Their most current collaboration is "Impossible Romance," a solo work that Sarkar first danced in December 2022 in New Jersey (pictured above). "Impossible Romance," which will become part of the longer program in development, will also be performed January 27-28 at the 2023 Faculty Dance Concert. Tickets for this concert are available at this link.