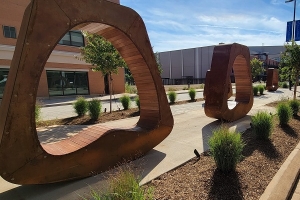 At one time, more American flags were printed in Rock Hill, S.C. than in any place in the world. The Rock Hill Printing and Finishing Company, which opened in 1929, was one of the largest cloth printing and finishing companies in the United States and the center of that patriotic production during World War II. It was also, says Stephen Turner, “the biggest business concern that has ever existed in the city of Rock Hill.”

Called The Bleachery, because bleaching cloth is the first stage in the printing process, the company employed almost 5,000 people at its height in the mid 1960s – a third of the town’s adult population – and thus “played an outsized role in the life of the community,” Turner says.

The Bleachery closed in the 1990s, but Turner, who is the retired director of Economic and Urban Development for the City of Rock Hill and a self-described “local history buff,” felt that the company’s economic and geographic prominence (it sat in the middle of town) warranted ongoing recognition that would preserve the history beyond living memory. After years of planning and hard work, The Bleachery Heritage Project is finally coming to fruition through a design and fabrication process led by Associate Professor of Architecture Rachel Dickey with a team of architecture students and collaborators.

In 2020 Dickey won the commission to design a plaza in what is now called University Center, because of its proximity to Winthrop University, after Turner successfully secured an Our Town Grant from the National Endowment for the Arts and matching funds from the city. He and an advisory committee that included former Bleachery employees chose Dickey’s design through a Request for Proposals process that drew submissions from across the Southeast.

“Ultimately the team was impressed with Rachel’s concepts,” Turner says. “She built 3D models and brought them to the interviews. Rachel’s concept was to really activate the space, invite people into the space. I don’t think any of the other proposals had that thought. Everybody loved her design.”

Even before The Bleachery opened “on the cusp of The Great Depression,” Turner says, the area was already “the economic heart of Rock Hill.”

In 1881, the Rock Hill Cotton Factory began operation, launching the town’s textile industry. (The factory complex, which grew and evolved over the years, is now a retail and office space.) A decade later, the Rock Hill Buggy Company opened just down the street, becoming an industry leader by 1900. When horseless carriages overtook horse-drawn buggies, the factory became the Anderson Motor Company, producing cars from 1916 to 1924.

After the Anderson Motor Company closed, Turner says, “there was a big push to attract another business for that space.” The Rock Hill Finishing and Printing Company would be that business.

The new plaza pays tribute to the area’s long industrial history. While the buildings that once housed buggies and bleachers no longer stand, the brick archway to the factory’s front door, bearing the name Rock Hill Finishing and Printing Company, announces the entrance to the plaza. Large pieces of machinery stand proudly along the walkway, and signage pedestals with text by Turner and Paul Gettys tell the stories of the former businesses.

Scattered among these artifacts and chronicles are the showpieces of Dickey’s design and perhaps the plaza’s main attraction: five giant rockers that themselves look like machine parts.

“The primary purpose of the rockers is to activate public space,” says Dickey. “Since the site is a former median, the intent is to provide an interactive component to draw the public in and learn more about the history while they are there. There is some resemblance of the rockers to the roller machines used to print colorful patterns on cloth. Skilled artisans engraved patterns on the copper rollers of these machines and then fabric was rollered through them during the printing process.”

The result, Turner says, “is a fantastic use of that space. Rachel and her team have done a phenomenal job.”

The Bleachery Heritage plaza in Rock Hill. The grand opening has yet to be scheduled.

Dickey’s final design is the product of widespread collaboration.

“There are a lot of hands in this project,” she says.

As is her custom with all of her public commissions and research projects (and there are many!), Dickey hired architecture students as research assistants. Over the course of two and half years, seven students – undergraduate and graduate – worked on the development and fabrication of the plaza elements.

“I couldn’t do what I do without the teams of students,” she says. “It is very much my approach when I take on these projects. If we can find more ways for student employment that is productive to their education, that’s a good thing.”

Dickey also enlisted the help of her colleague Nadia Anderson, associate professor of architecture and urban design, and the City Building Lab to connect with local community members in the fall of 2020. A storytelling workshop produced oral histories with former Bleachery employees that can be heard via QR codes on the plaza’s signage. At a programming workshop, a community member came up with the idea of stamping the concrete walkway with patterns reminiscent of printed cloth. Art students at Rock Hill’s Southpoint High School analyzed historic fabric patterns and then created their own designs, which informed the imprints on the plaza’s path. 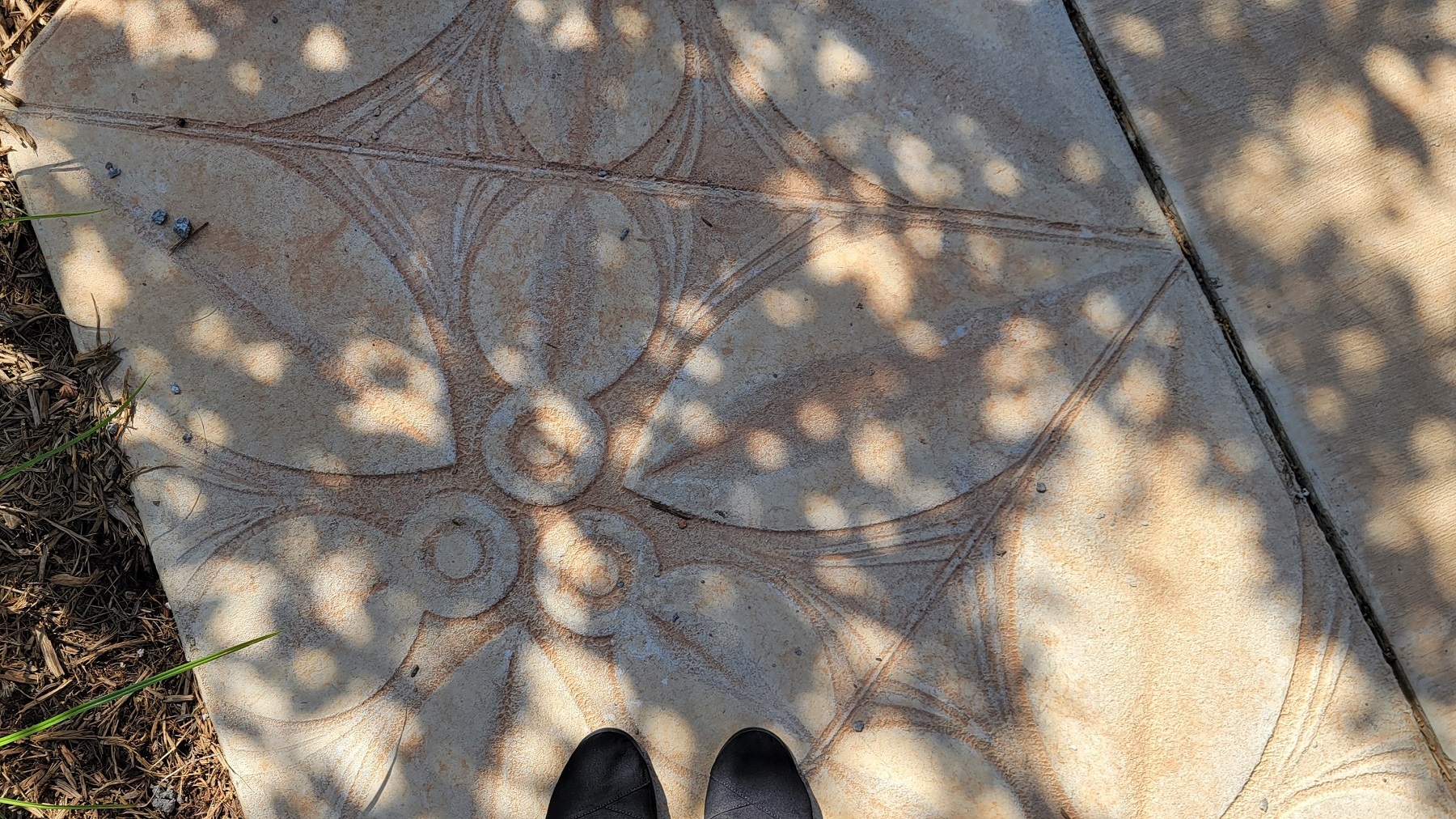 Sierra Grant, who completed her B.A. in Architecture in 2021 and will graduate with her master’s degree in May, worked on the project for more than a year, both in design development and fabricating the rockers.

“I think that all of us are really happy with the way the Rock Hill plaza came out,” she says. “There were plenty of trials and errors when it came to the design process and actually getting the rockers to rock, but in the end it all worked out. It's always exciting to work through issues with the team and then see the design come to life when it's installed.”

Grant has worked with Dickey on previous projects and has been inspired by the challenge.

“When I graduate I would love to continue working in the realm of public art / public space design, and working on this project has just reaffirmed that.” 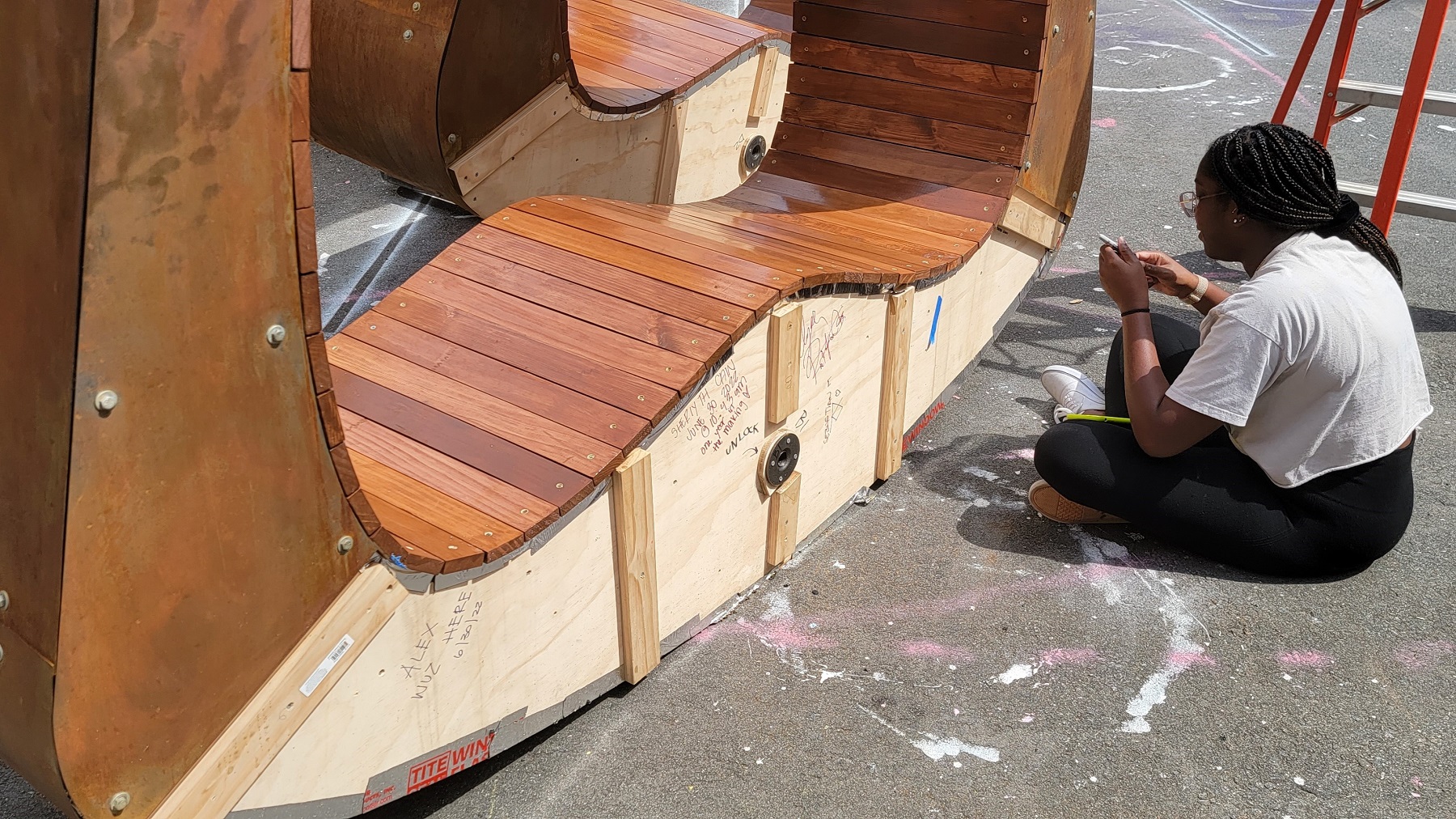 Sierra Grant signs her name to a rocker before it was transported from Storrs building on campus to Rock Hill.