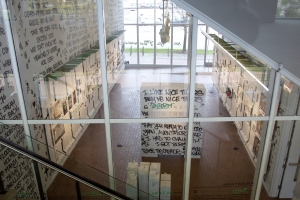 Tuesday, June 28, 2022
Inside Sekou Cooke's "Close to the Edge: The Birth of Hip-Hop Architecture."

“Walk through The Dubois Center at UNC Charlotte Center City and you’ll see rap lyrics from Nas, Slick Rick and Grandmaster Flash and the Furious Five’s hit song ‘The Message’ splashed in graffiti on the walls,” wrote Gordon Rago recently in the Charlotte Observer. “Framed photos hang on fragments of a shipping container, showing concepts of projects that could be interpreted as hip-hop architecture. There are 3-D models, devoid of color, showing distorted, off-grid structures that shift your thinking about what a traditional building looks like.”

This nontraditional exhibition in The Dubois Center’s Projective Eye Gallery is Close to the Edge: The Birth of Hip-Hop Architecture, a show curated by Master of Urban Design Director Sekou Cooke, on view through July 15. The exhibition celebrates the work of practitioners, academics, and students at the center of an emerging architectural revolution. 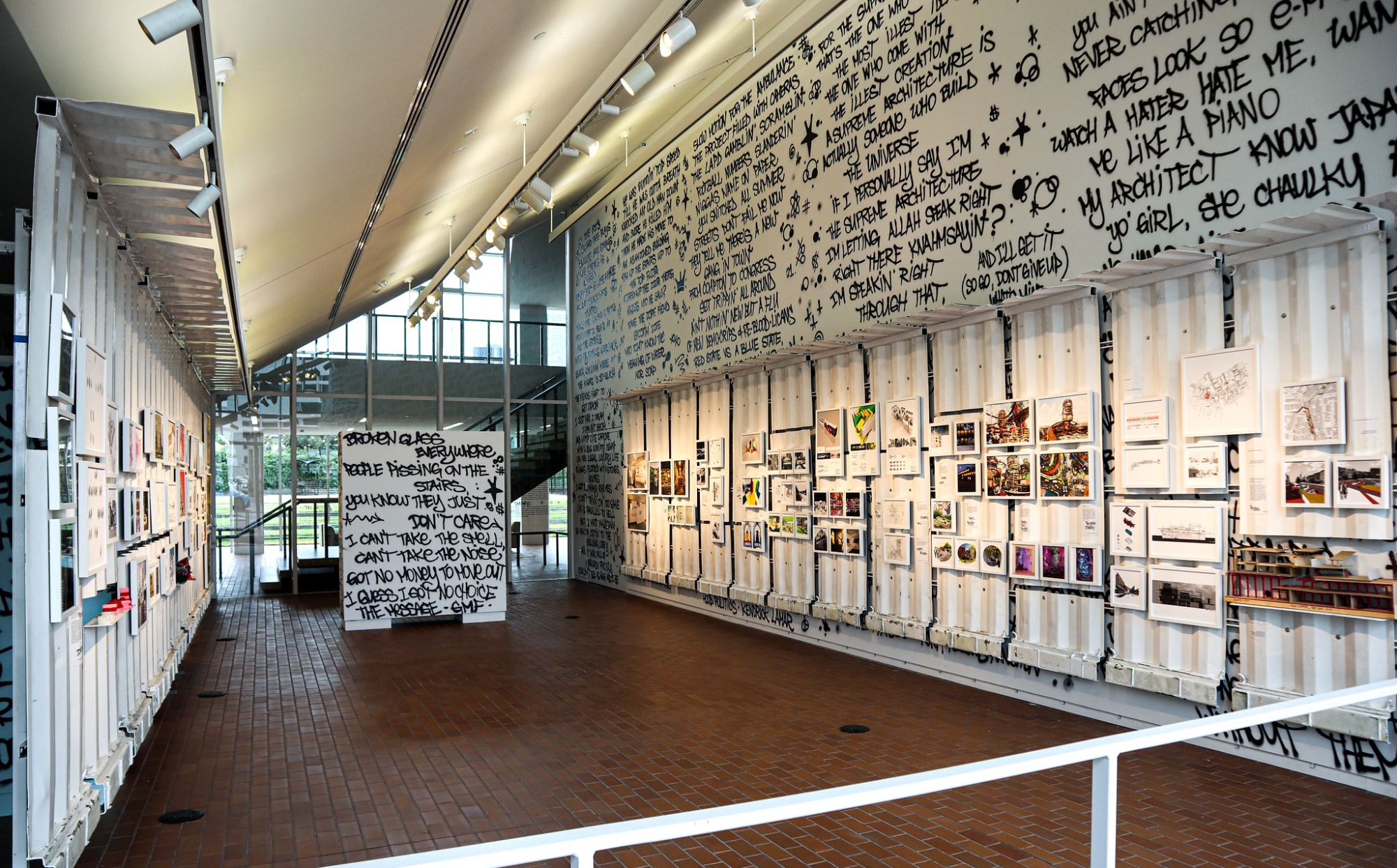 “I want people to see that there is a different way of approaching architecture than they might have been exposed to in the past––one that is rooted in the cultural expressions of peoples often omitted from most conversations about architecture,” Cooke said recently. Cooke came to UNC Charlotte last fall from Syracuse University, where he was a professor in the School of Architecture. He is the author of the monograph, Hip-Hop Architecture, published in spring 2021. 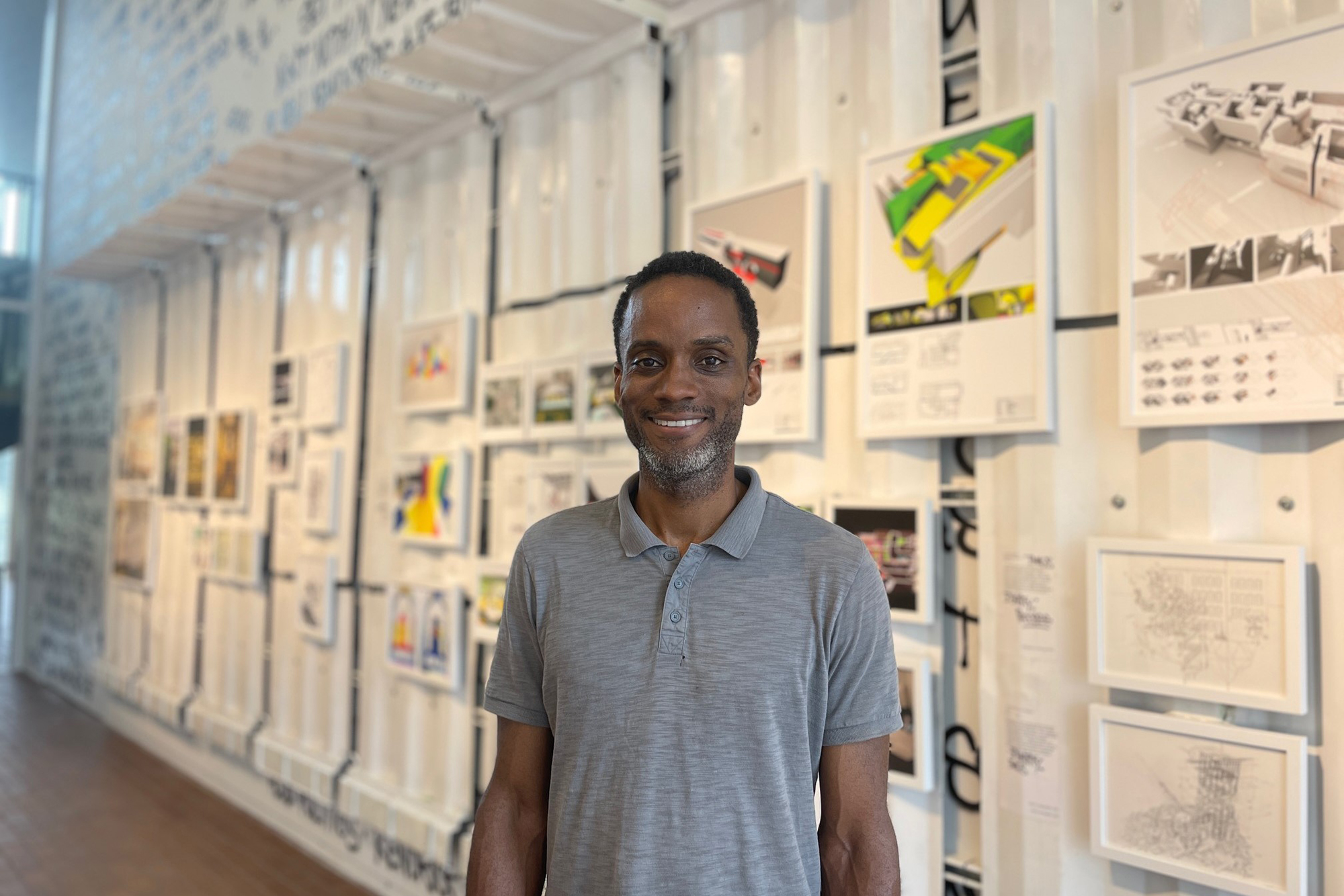 Hip-hop was established by the Black and Latino youth of New York’s South Bronx neighborhood in the early 1970s. Over the last five decades, hip-hop’s primary means of expression—deejaying, emceeing, b-boying, and graffiti—have become globally recognized creative practices in their own right, and each has significantly impacted the urban built environment. Hip-Hop Architecture translates these elements of hip-hop culture into spaces, buildings, and environments. 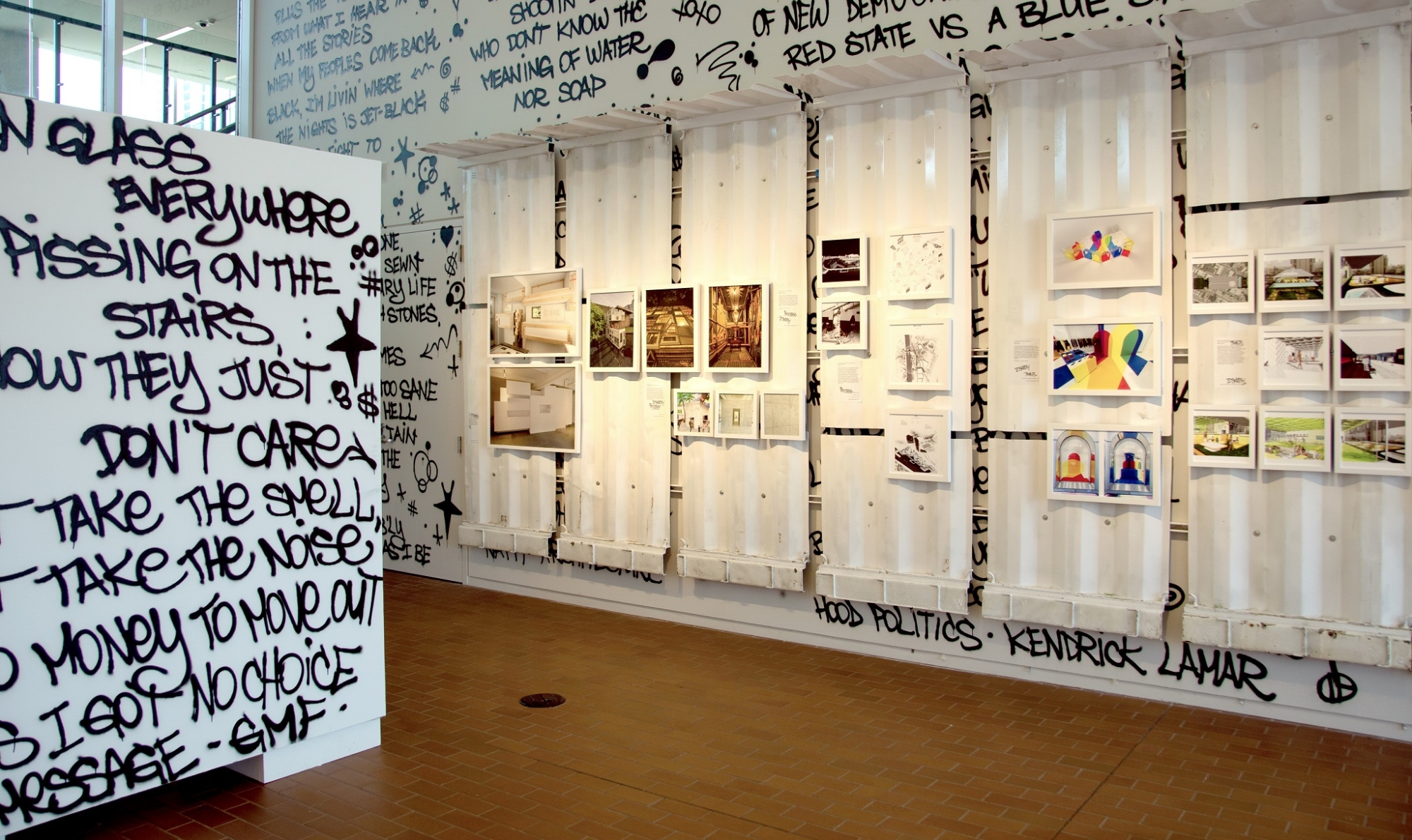 Close to the Edge: The Birth of Hip-Hop Architecture includes work by 25 participants representing seven countries, with projects ranging across a variety of media and forms of expression. The exhibition is organized using three primary characteristics: hip-hop identity; hip-hop process and hip-hop image.

The identity theme represents creators who self-identify with the hip-hop community.

In 2011, a low-income housing program in Haarlem, Netherlands, commissioned graffiti artist Boris “Delta” Tellegen to design a brick façade pattern for one of their housing projects. The result is a warped, layered distortion of the building’s window pattern that creates a 3D visual effect. In this project, Delta, one of the pioneers of European graffiti writing, was able to go beyond mere wall painting to affect the wall construction itself.

The process theme demonstrates methods of production that use specific hip-hop techniques or values.

Jamaican-born designer Nina Cooke John examined linguistic patterns in Caribbean alterations to and appropriations of Standard English to develop a process of designing for appropriated “leftover” spaces in New York’s Caribbean neighborhoods. A narrow slot between two buildings on White Plains Road in The Bronx is shown in this example. In her models, the proposed informal porch bridging the gap becomes a culturally significant gathering space. This thesis project highlights the many resonances with Caribbean culture found within the hip-hop community.

The image theme represents products that are visibly recognizable as part of an established hip-hop aesthetic.

For her proposal to transform the derelict Graffiti Pier on Philadelphia’s Port Richmond Waterfront into a public park, landscape architect Sara Zewde began with studies of the waterfront and graffiti culture and of the distinct communities represented by both. Through intentional engagement with Philly’s graffiti/street art community and with residents desiring greater access to the waterfront, Zewde created a “remix” design that offers new amenities like walkways, lighting, and seating while preserving the original gritty hip-hop vibe.

“What hip-hop architecture might bring to urban design is a celebration of current conditions, an amplification of pieces that work well, and a remembrance of pieces of the city that may have been lost or forgotten,” said Cooke. “In Charlotte that might result in more hybridized neighborhoods where multiple types of activities involving multiple cultural backgrounds may happen at once. Several experiences of the city can begin layering on top of each other.”

Photos by Mirra Goldfrad, Meg Whalen, and Heather Felts. Text drawn from the Close to the Edge exhibition texts.