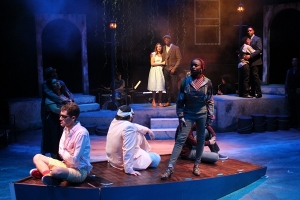 Three professors in the Department of Theatre have jointly written a chapter for The Arden Research Handbook of Shakespeare and Contemporary Performance, a new book published this month by Bloomsbury. Andrew Hartley, Kaja Dunn, and Christopher Berry contributed the essay "Pedagogy: Decolonizing Shakespeare on Stage," which addresses issues of race in the performance of Shakespeare's works using the Department of Theatre's Fall 2018 production of Twelfth Night as a case study (pictured). Hartley directed the production; Berry was the voice and speech coach. During the production, Dunn taught the history of Black Shakespeare performance.

Assistant Professor of Acting Kaja Dunn is an affiliate faculty for Theatrical Intimacy Education. Her research centers on decolonization and pedagogy for theatre students of color. She is a frequent presenter on issues of Equity, Diversity, and Inclusion in theatre pedagogy and the profession and recently co-authored the article, “Training theatre students of colour in the United States,” for the journal Theatre, Dance and Performance Training. She serves on the board of the Black Theatre Network.