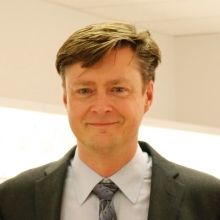 He teaches Renaissance theatre history and Shakespeare, blending literary and historical-critical practices with a material sense of contemporary theatre, and leads the department's Shakespeare in England spring break course. He also works as a dramaturg and occasional director for campus productions of early modern drama.

As A.J. Hartley he is also the bestselling author of 23 mystery, thriller and fantasy novels for children and adults, including the Darwen Arkwright series for middle grades readers, the first of which won best young adult novel of 2012 from SIBA, Steeplejack (Tor Teen, 2016) and, with Tom DeLonge, Sekret Machines (To The Stars/Simon and Schuster, 2016). With David Hewson, he has written adaptations of Shakespeare’s Macbeth and Hamlet, the latter of which won Audible's Book of the Year for 2014.

Dr. Hartley received his undergraduate degree from Manchester University (UK) and his Masters and Ph.D. from Boston University. Visit Website.