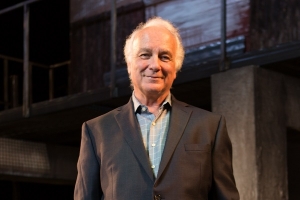 Wednesday, February 24, 2021
Lambla is the founding dean of the College of Arts + Architecture.

Ken Lambla, professor of architecture and founding dean of the College of Arts + Architecture (CoA+A), has been named to the College of Fellows of the American Institute of Architects (AIA), the AIA’s highest membership honor. Only three percent of AIA members achieve Fellowship (FAIA) status, honored, according to the AIA, “for their exceptional work and contributions to architecture and society.”

Lambla was nominated under Object Two: "To advance the science and art of planning and building by advancing the standards of architectural education, training, and practice."

Lambla joined the UNC Charlotte architecture faculty in 1983, becoming chair in 1998 and dean of the College of Architecture (now the School of Architecture) in 2002. In 2006, he initiated the process of bringing the arts and design together in an educational forum that is unique in the Carolinas and rare in the United States. The College of Arts + Architecture launched in 2008, and Lambla led the CoA+A until December 2018.

“As a member of the second graduating class of the College of Architecture at UNC Charlotte in 1976, a former adjunct instructor of professional practice in the College, and a practicing architect in Charlotte since 1981, I have had the opportunity to watch the School grow and mature under the leadership of Ken Lambla since his arrival in 1983,” wrote Dennis Hall in his sponsor letter supporting Lambla’s application. “His knowledge and insights in architectural education and the future of professional practice has transformed the School of Architecture.”

Under Lambla’s leadership, the research agenda and number of graduate programs in architecture expanded to include, for example, the Master of Urban Design and the Dual Master of Architecture/Master of Science in Information Technology or Computer Science, and new research centers were established, including the City Building Lab, the Integrated Design Research Lab, and the Digital Arts Center. In addition, Lambla fostered greater opportunities for mentorship and professional activity for students through such efforts as the creation of formal student chapters of professional organizations, the establishment of the Integrated Path to Architectural Licensure program, and large-scale projects such the U.S Department of Energy Solar Decathlon. Recognizing the necessity of a global education, he created, nurtured, and advanced multiple study abroad programs for students.

“Throughout his career at UNC Charlotte as a faculty member, chair, and dean, Ken has always demonstrated a profound commitment to architectural education and advancing the needs of the profession,” said Dr. Lee Gray, senior associate dean of the CoA+A and professor of architectural history, who came to UNC Charlotte in 1992. “While this commitment embraces the science and art of building, Ken has also sustained a powerful commitment to the importance of understanding the societal impact of architecture.”

As an architect and an educator, Lambla has been committed to demonstrating the role of arts and design in healthy communities, economic opportunity, and environmental stewardship. Since returning to the faculty of the School of Architecture, he has served as co-principal investigator in three grant-funded initiatives: “Arts-based social mobility: Exploring cultural capital in Charlotte, NC,” funded by the National Endowment for the Arts; “Social Impact of the Arts Survey,” funded by the Gambrell Foundation through the UNC Charlotte Urban Institute Faculty Fellowship; and “Arts-Science Interactions: Cracking in Geomorphology,” funded by the National Science Foundation.

“The impact of Ken’s accomplishments reaches beyond architectural practice in the region and brings the research and thinking he has fostered to the challenges of our day,” wrote Hall.

Lambla will retire from UNC Charlotte in June 2021.