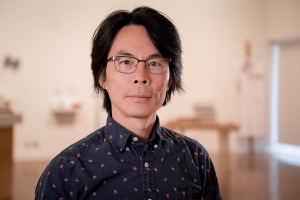 A project led by Associate Professor of Urban Design Ming-Chun Lee is one of seven recipients of $1 million in funding from the John S. and James L. Knight Foundation to foster civic engagement through access to public data. Funded as part of the Knight Foundation’s “Smart Cities” initiative, Lee’s project, Transforming City of Charlotte with Immersive Visual Data, will develop an immersive platform that provides 3D visualizations of future developments in Charlotte neighborhoods and community data to engage community members in the creation of the City of Charlotte’s comprehensive plan.

Transforming City of Charlotte with Immersive Visual Data, which has received $239,871 from the Knight Foundation, builds upon research that Lee has been conducting since 2018, using augmented reality (AR) and virtual reality (VR) technology to help people think about the impact of urban design and neighborhood change on their lives. The work had its first public demonstration in an interactive installation at the Projective Eye Gallery at The Dubois Center at UNC Charlotte Center City in March 2018. With augmented reality, delivered via an app devised by Ankit Kelkar, then a graduate student in the College of Computing and Informatics, gallery visitors could view huge floor maps of Charlotte’s Cherry neighborhood through an iPad and see demographic changes to the area over time—increases in property values, for example, or the racial and economic makeup of the historically African American neighborhood.

That installation attracted the attention of City of Charlotte officials, staff at the Levine Museum of the New South, and the Knight Foundation, among others, and led to Lee’s first Knight Foundation grant, through the Niantic/Knight Fellows program. It also led to a deep partnership with the Levine Museum, where the current exhibition #Home CLT integrates AR technology and geographic information system (GIS) mapping into an exhibition about Charlotte neighborhoods, past and present.

Transforming City of Charlotte with Immersive Visual Data was developed through collaboration with Saeed Ahmadi Oloonabadi, a graduate of the Master of Urban Design program at UNC Charlotte who is currently a Ph.D. candidate at NC State University, and Rachel Stark, senior principal planner and urban designer in Charlotte’s Planning, Design & Development department.

“I cannot say this is my project,” said Lee. “This is teamwork.”

At its core is “the use of technology to help citizens see a better way to design neighborhoods,” Lee said, “to help people visualize what they may see in 20 years in their neighborhood.”

The project was conceived to encourage resident participation in the Charlotte Future 2040 Comprehensive Plan and is geared in particular to attracting young people’s interest. Using VR and AR technology, rich GIS data sets, and 3D renderings of different place types, residents can participate in “scenario planning,” said Lee, comparing different place types and forecasting what the implications of different choices will be on things like density, amenities, and job creation. They can then ask questions, provide comments, and express their preferences.

“My hope is that we’re not just visualizing data, but creating an interface where people can see the future,” said Lee.

Lee and Stark also see possibilities for the technology in future transit oriented development  and economic development projects, such as those connected to the Silver Line and corridor planning.

“As our world changes rapidly around us, it is more important than ever to broaden our engagement toolkit,” said Stark. "Not everyone understands city planning and its real impact on their lives and surroundings. This project will provide a valuable and accessible two-way communication tool that helps people visualize possibilities, change, and impact while also helping the City understand community values, priorities, and opportunities for adjustments for how we plan for growth. We value our partnership with the UNC Charlotte and NC State University as it joins the universities’ ability to create and measure the impact of a new approach with our practice and community relationships in the field of city planning.”