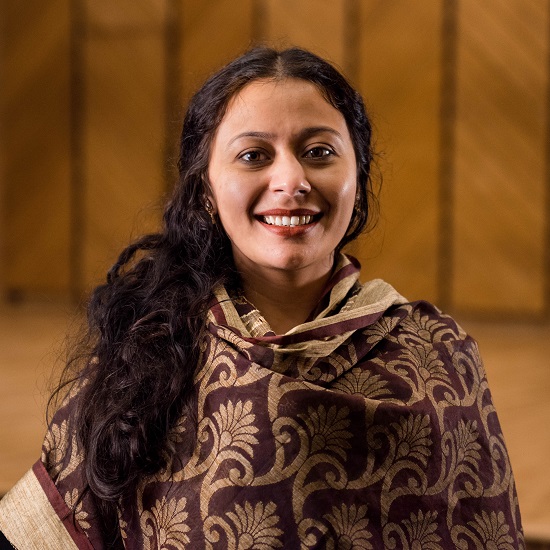 Whoever is first to arrive in the Srjan dance studio in Odisha, East India has to sweep the floor. After waking up, eating breakfast and tying her sari, Assistant Professor of Dance Kaustavi Sarkar was often the one to do it. She would head to the studio, pick up the broom that rested by the door, and clear the space before the first class of the day began.

“That ritual of sweeping the floor in the morning is so grounding,” Sarkar says. “It’s a meditative exercise. It’s also gratifying in the sense that you are making space for yourself as well as welcoming others.”

Sarkar would sweep to pay homage to herself, to the space, to the other dancers, and to the ancestors of the centuries-old East Indian classical dance form she practices, Odissi. She would remember, in particular, that the room she was sweeping happened to be one of the same studios used by dance legend Guru Kelucharan Mohapatra, the man who revived and popularized Odissi and founded Srjan.

Long before she came to UNC Charlotte, Sarkar was a student and later a teacher at Srjan, as well as a dancer in their traveling professional ensemble. There she found an institution that would captivate her for the rest of her life. Srjan is unique in the fact that students studying at the school, as well as professionals working in the ensemble, not only dance at the institution but live there as well.

“My work was upstairs in the studio, and my life was downstairs,” Sarkar said.

Now her life has changed. She earned a Ph.D. at The Ohio State University and is a full-time academic at UNC Charlotte, teaching courses in Foundations in Dance and Dance Appreciation. She also teaches technique courses in Odissi, a rare thing in American universities.

Her research agenda is interdisciplinary: She is fascinated by the potential of technology – such as Virtual Reality – in dance and is interested, too, in architecture, often collaborating with faculty in the School of Architecture to explore the integration of architectural structures, digital technologies, and choreography.

In the spring of 2019, Sarkar organized an international conference, "Sensate Technicities: A Conversation Across Dance Cultures and Techniques." More than one hundred practitioners and scholars of Odissi dance came from across the globe to participate in the conference at UNC Charlotte. Sarkar hopes to continue that effort.

Part of this profile was taken from an article by dance major Cecilia Whalen for The Niner Times.