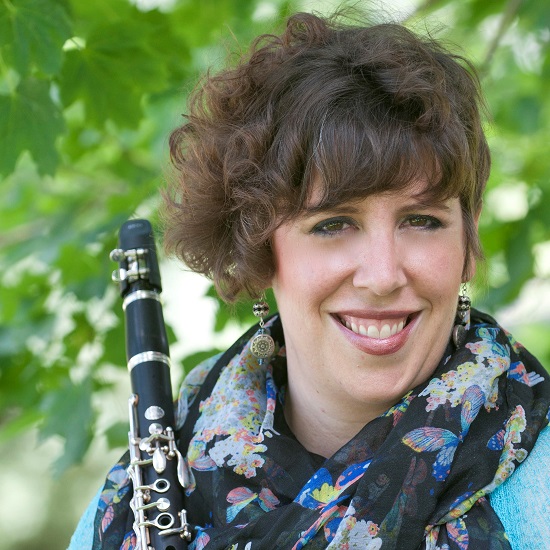 Combining forces in music and community
Assistant Professor of Clarinet

The name Spatial Forces Duo is more likely to conjure up images of Jedis wielding light sabers than musicians wailing on clarinets, but the sci-fi moniker actually refers to clarinet professor Jessica Lindsey and her musical partner Christy Banks. The two women founded Spatial Forces Duo in 2008 when both were performing in a new music ensemble in Lincoln, Nebraska. Trying to open up to “as many sounds as possible,” Lindsey says, they paired the woodwind timbre of a clarinet duo (often including bass clarinet) with electronic music.

“We liked the variety of sounds you can get – the bigger sound bed (i.e. “forces”) – and also wanted to be portable and play in alternative venues, like bars and museums (i.e. “spatial”).”

Over the dozen years since their first special commission, a work by Banks’s husband, the composer Rusty Banks, the duo has built a repertoire of music for their Spatial Forces. They are currently working on an album of new music written especially for them, for which Lindsey recently received a Faculty Research Grant and an Arts & Science Council Regional Artist Project Grant.

The CD will feature electroacoustic music by composers Meredith Butterworth, Corey Dundee, and Alex Temple. Butterworth is a UNC Charlotte alumna and percussionist who received her master’s degree from NYU. Dundee is an Ann Arbor-based composer and saxophonist who received Chamber Music America's 2016 Classical Commissioning Grant. Temple, a vocalist, has worked with groups from the American Composers Orchestra to the Sissy-Eared Mollycoddles.

The choice of these young and diverse composers – Butterworth and Temple identify as she/her, Dundee and Butterworth as African American – reflects Lindsey’s commitment to promoting new voices in music, a research focus that has developed since she came to UNC Charlotte in 2014. (Her 2018 CD, Set No Limits, featured music by women composers, past and present.) Having grown up in Bismarck, North Dakota, she spent 10 years in Lincoln, completing her bachelor’s and master’s degrees at the University of Nebraska, before moving to Boulder, Colorado, to pursue her doctorate. Charlotte, she says, is the “largest and most diverse” city she has lived in.

“I’ve become more aware of equal rights and movements that strive for gender and racial equity. I really started to realize the inequity of representation in the music I played, which was mostly written by white men.”

The Charlotte arts community and the interdisciplinary nature of the College of Arts + Architecture have also “stretched me so much,” Lindsey says. She has made a point of connecting to faculty in other disciplines, regularly creating collaborative works with visual arts, dance, and theatre. Most recently, she composed music for bass clarinet quartet and electronics for choreography by dance professor Gretchen Alterowitz. Three students joined Lindsey on stage to perform the piece, before you get there.

“It was so fun to involve the students on this collaboration, because they were so excited. They loved being part of a larger experience.”

And Lindsey has become a key member of the local music community, frequently performing in concerts and even teaching in the Charlotte Symphony/Arts + after-school music program, Project Harmony, where she works with elementary school students from communities who face economic challenges.