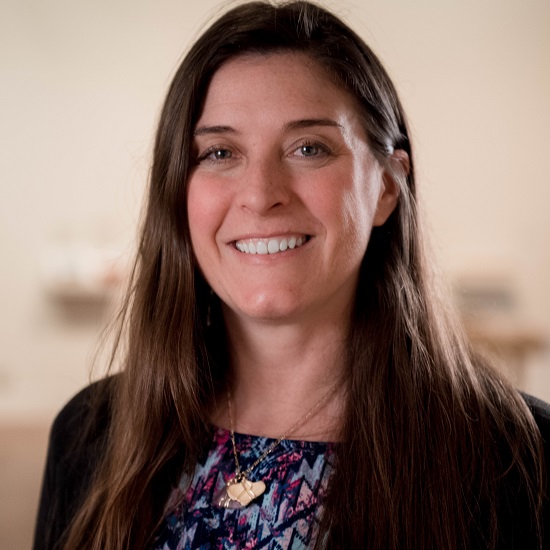 When Associate Professor of Photography Aspen Hochhalter was a freshman in high school, her dad gave her a 35mm film camera. Her high school in Manitou Springs, Colorado, had a dark room and a good art teacher, and soon photography, along with music, became a serious hobby. When she left home a few years later to attend Creighton University, a small Jesuit school in Omaha, Nebraska, she took her camera and her French horn with her. 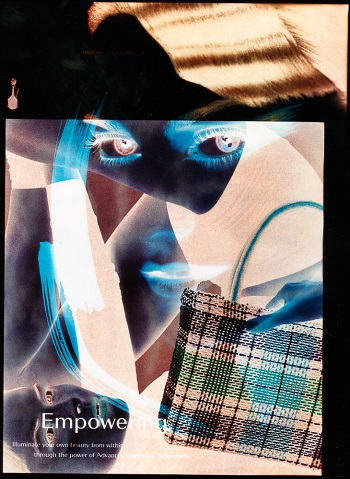 The school’s interdisciplinary program “allowed us to have a lot of freedom,” she says. “We had the run of the building. We were there 24 hours a day. It was just one of those magical times.” For her BFA thesis project (example, right), she began an investigation into the representation of women in advertising, printing through magazine pages in the color dark room to create “photograms” that merged both sides of the magazine pages into one image.

That theme – how women are portrayed visually in popular culture and the media – also became the focus of her MFA thesis three years later as she completed graduate school at East Carolina University. While a graduate student, Hochhalter taught photography, digital media, and graphic design classes and discovered she loved teaching. When a position opened at Chowan University, she headed to the little town of Murfreesboro in eastern North Carolina and taught there for two years before coming to UNC Charlotte in 2007.

The representation of women has continued to figure into Hochhalter’s work, but in the past few years, travel and nature have become more prominent subjects. Since 2010, she has co-led a biennial summer study abroad trip to Rome. That was the same year that Instagram launched, and in the intervening decade, Instagram, like the cellphone, has dramatically changed the way we think about and use images.

The juxtaposition of the instant digital culture of Instagram and the patient, methodical practices of old photographic techniques fascinates Hochhalter and has shaped much of her recent work.

“The ephemeral quality of an Instagram post is completely opposite of dark room, hands-on processes. I love that idea of playing with what a photograph means, right now, when everybody has a camera in their pocket.” 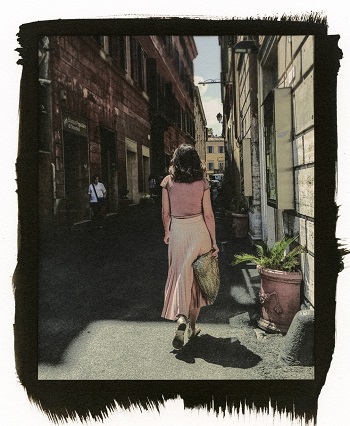 A body of work from the 2016 and 2018 Rome study tours, Instagram By Hand, demonstrates Hochhalter’s blending of the old and new technologies: 120 combination inkjet and cyanotype or Van Dyke brown prints from her Instagram feed. (See example, left.) Removing the black layer, or “K,” from the CMYK photos in Photoshop, she then printed her Instagram pictures with ink jet on watercolor paper. Next she turned the K layer into a negative and printed it onto the photo using either cyanotype or Van Dyke brown, both 19th-century processes. The result – especially given the Roman settings – plays with time, merging multiple eras into a single visual experience.

Hochhalter is continuing that dual digital/chemical process with images from other travels, too, particularly focusing on representations of nature. Last spring she had just returned from Costa Rica when the pandemic forced everything to shut down. The panoramas that she photographed there, along with flora from an earlier study abroad trip to Ireland, became the subject of Future Nature: Content Aware, which debuted in the Department of Art & Art History faculty exhibition in Fall 2020.

While the 2020 Rome summer abroad was cancelled, Hochhalter is looking forward to 2022, when once again she will join other faculty and students in an interdisciplinary program that combines studies in street photography, film, art history, mixed-media, and Italian language.

“It’s really a fun, happy experience, a major life experience for the students. It really does make them global citizens. It’s a revelation!”