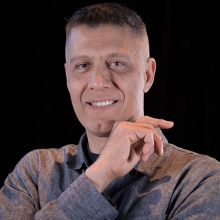 Shamou is Director of Music for Dance at UNC Charlotte.  Shamou’s music career began in his native Iran where he also studied and performed with the Iranian National Ballet as a dancer.  He began his formal music training in Tehran, studied with teachers from the Royal College of Music in London, and completed his training at Berklee College of Music in Boston, earning a Bachelors of Music Degree.

His compositions for dance and theater have been presented in Europe, Africa, China, and Mexico.  In the United States, his work has been showcased at National Performers Network, performed and presented at the North Western University, Marymount Manhattan College, Bates College, Bowdoin College, UNC Charlotte, as well as Portland Stage, BAM, Baryshnikov Art Center, and Fools Fury Festival.

Since 1990 he has taught hand drumming, percussion, music for dance and body music across the country and abroad in a wide variety of settings, at Harvard and Boston Universities, Bates, Bowdoin and Wellesley Colleges, as well as festivals, including the Bates Dance Festival, National and Regional High School Dance Festivals.  He has been a member of the Maine Arts Commission’s Artist Access Program and the New England States Touring Roster of the New England Foundation for the Arts.

He has contributed music to numerous CD compilations and has released his own solo CDs entitled Spirits Dance, Traces, Nebulae, and Shodjah with his former band by the same name, and Live at CCE with his latest ensemble Loopin’.