Theatre students Sammy Hajmahmoud and Jennifer Huddleston will be featured performers in the Charlotte Symphony’s “KnightSounds” concerts on May 20 and 21. In connection with the international celebration of the 400th anniversary of Shakespeare’s death, the program presents Romeo and Juliet in a montage of orchestral pieces, opera arias, a ballet pas de deux, and brief scenes from Shakespeare’s tragedy. Charlotte Symphony Music Director Christopher Warren-Green will conduct. Hajmahmoud and Huddleston will perform the title roles in the play excerpts, directed by Robinson Distinguished Professor of Shakespeare Andrew Hartley, who has also served as the program’s dramaturg. 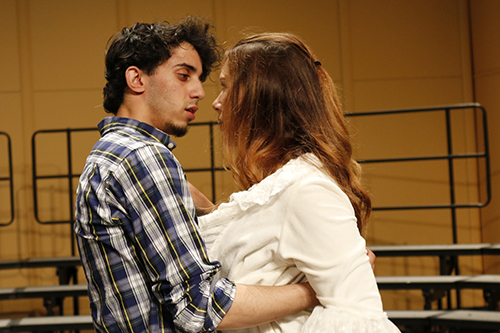 Hajmahmoud, a junior, and Huddleston, a senior, are both theatre majors and have participated in the UNC Charlotte Department of Theatre/Shakespeare in Action “36 in 6 Project,” performing in productions such as Hamlet, The Shrew Project (The Taming of the Shrew), and Romeo.Juliet. The “36 in 6 Project,” in which 36 Shakespeare works were addressed over a six-year period, culminated on April 23 with As We Like It, a celebration and performance in Robinson Hall for the Performing Arts.

The Charlotte Symphony Romeo & Juliet concerts, presented in partnership with Charlotte Ballet, are the final performances of the 2015-16 KnightSounds series and will take place in the Knight Theater at Levine Center for the Arts at 7:30 pm on Friday, May 20, and Saturday, May 21. The performances will also be broadcast live on a large screen in the Levine Center for the Arts plaza for free viewing. Visit charlottesymphony.org for details and tickets.