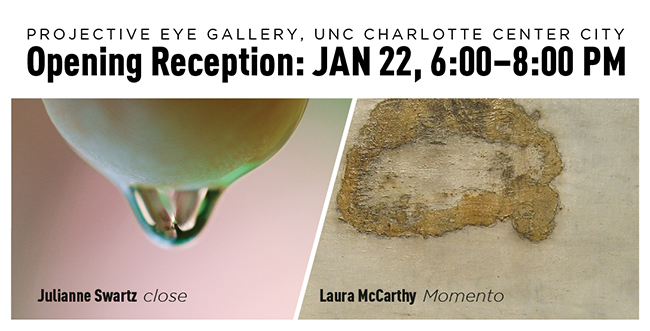 The Projective Eye Gallery at UNC Charlotte Center City will present work by two artists, Julianne Swartz and Laura McCarthy, January 22 through March 4. No strangers to the nurturing voice, these interdisciplinary artists are masters at facilitating the intimacy of the moment – dismantling the chaos of the outside world and encouraging presence from their audience.

close is a solo exhibit of three works by Julianne Swartz at UNC Charlotte Center  City: “Terrain” in our main gallery, “Close” photographic prints in the front lobby, and “Black and Blue Weave” on the second floor atrium viewing space. Swartz has an uncanny ability to express tenderness with a distilled simplicity. Her “Terrain,” a twelve-channel sound piece moving through 100 small suspended speakers, will fill the gallery space with an aural collage of warmth. Originally commissioned by the Indianapolis Museum of Art, “Terrain” is currently on loan from Artist Pension Trust. Swartz’s smaller work, “Black & Blue Weave,” appears as an intricate but loosely woven blanket in its own sound space on the second floor. As viewers approach, they hear sounds of self-soothing breath, melodies, and chimes – a post-bruise lullaby mollifying the discovery of gravity and pain for the first time.

In 2015 Swartz received the UrbanGlass Visiting Artist Fellowship from the Bard Research Fund, for research with Markus Greiner (physicist, Harvard University), and an Anonymous Was A Woman Award. Previously she was recipient of the Academy Award in Art from the Academy of Arts and Letters (2010) and the Painters and Sculptors Award from The Joan Mitchell Foundation (2008).

Showing concurrently in the front window case at UNC Charlotte Center City will be Momento, paintings by Laura McCarthy. Known for her visceral abstractions, McCarthy has created new works inspired by the experience of loss and grief. These new canvases act as mementos of a moment – the threshold where the past and the future are simultaneously contained in the present – capturing the seen and unseen processes of remembering and letting go.

Laura Alma McCarthy earned her BFA in painting from UNC Charlotte and a BA in history from Davidson College in Davidson, NC.  She has been awarded an Emerging Artist Grant from the Arts & Science Council and has received residency fellowships from the Virginia Center for the Creative Arts, the Vermont Studio Center, McColl Center for Art + Innovation, and Virginia Commonwealth University Studio Program.  Currently, McCarthy is Founder/Executive Director of Swaraj Yoga, a non-profit organization addressing chronic homelessness in the Charlotte community through the use of yoga and meditation. She lives and works in Charlotte.