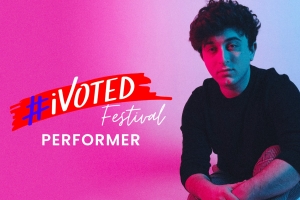 Theatre major Sam Pomerantz is among a group of big-name artists performing on November 8 in the #iVoted Festival, celebrating the privilege and right to vote. Founded in 2018 with more than 150 performances in 37 states, the biannual “IVoted” festival gained a greater presence when it went virtual in 2020. Billie Eilish, FINNEAS, Steph Curry, Eugene Mirman, and Seth Godin are set to make appearances on the Election Day livestream, along with nearly 400 performers.

With them will be Pomerantz, who will perform at 5:15 pm EST on the Girls Rock Asheville virtual stage.

“I got involved in the project because I’m an artist ambassador with one of their partners, HeadCount, who works with artists like Billie Eilish and Ariana Grande,” Pomerantz said. “The iVoted Festival team reached out to me and booked me for their 2022 webcast. I got involved because I’ve found a passion for encouraging people to vote and promoting democracy through music.”

Pomerantz will graduate in December with a Bachelor of Arts in Theatre and a Musical Theatre Certificate.

"My passion is performing, and I envision a career as an actor, particularly in musical theatre, but also as a singer-songwriter," he said. "I could also see myself in a production-based field, such as artist management or arts administration."

The #iVoted Festival mission is to “increase voter turnout by producing record-breaking webcasts and activating entertainment venues to let fans in who show a selfie from outside their polling place or at home with a blank and unmarked ballot,” the website states. “Young people in the U.S. are more likely to attend live music events (63% millennials) than vote (35.6% for 18-29). #iVoted bridges this gap by meeting potential voters where they are as a data-driven organization that books the top trending artists and talent in key states whose electoral margins are often decided by the size of a concert venue.”

To watch the livestream, head to the #iVoted Festival website.