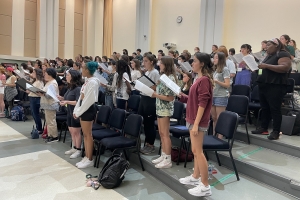 Just two days into their two-week exchange trip to Charlotte, the 17 students from Japan’s Tohoku University were scattered across the floor of Robinson Hall lobby, sitting in circles with members of the Women’s Chorus and laughing as they discussed foods they would “never eat.” Professor Ginger Wyrick, director of the Women’s Chorus, also known as The Charlotteans, and orchestrator of the “getting to know you” games, had just led the full group of 110 voices in their first rehearsal together and now was encouraging them to chat.

A few days later, the students would gather for a Labor Day picnic and the chance to try some “weird” American foods – Pop tarts, for example, and root beer. They would also get the full Charlotte experience: a football game in Jerry Richardson Stadium, a Broadway play at the Blumenthal Performing Arts Center, shopping at SouthPark Mall, an exhibition at the Mint Museum. 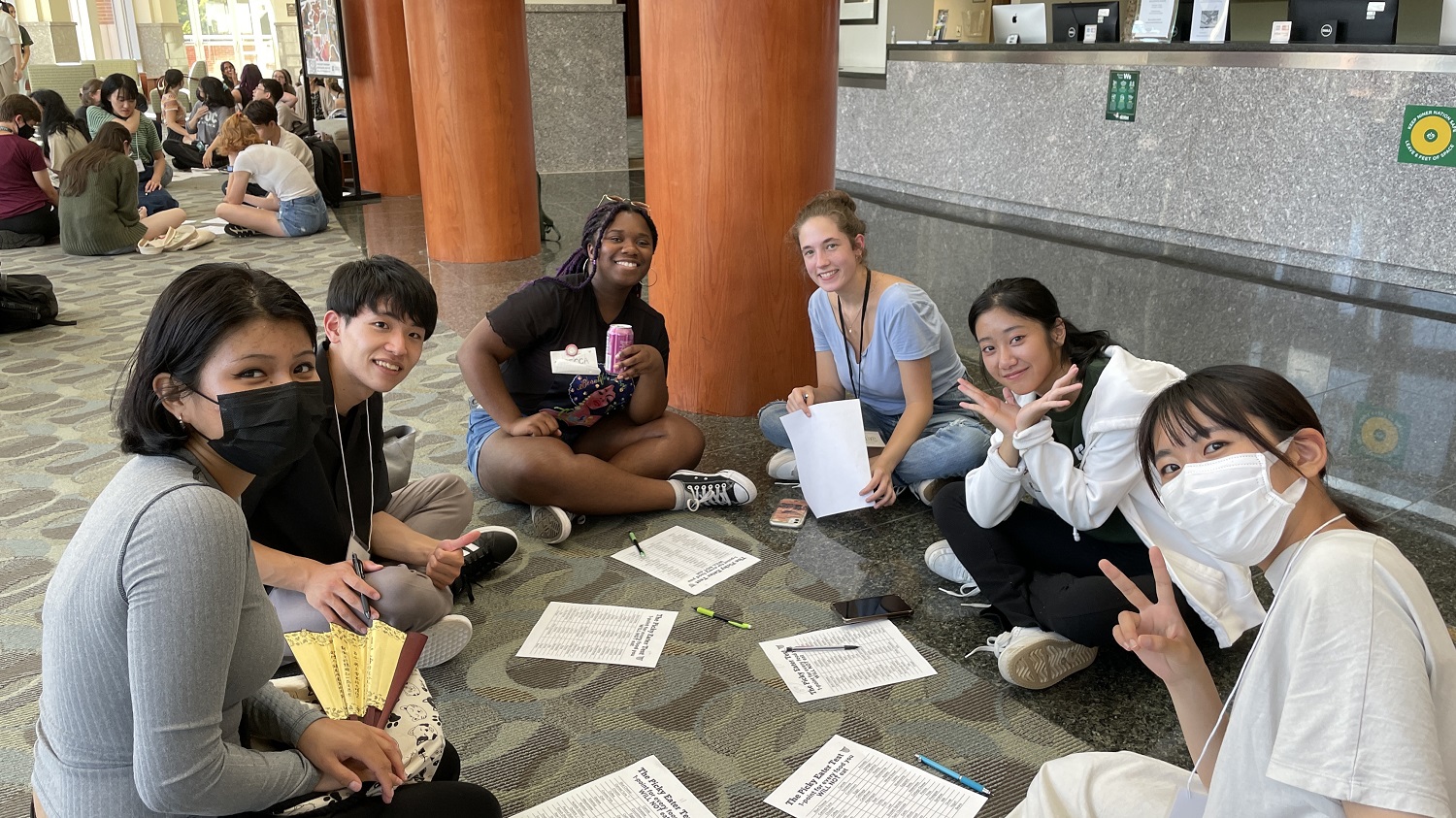 And most importantly to Kazuko Suematsu, they sang.

The residency is Suematsu’s brainchild. A longtime partner institution of UNC Charlotte, Tohoku University has no formal music program, but, she said, many of the students “have learned music since childhood. Some have studied since as early as two years old!”

Suematsu said she knew “how enriching it is for a university to have music” and wanted to connect the students from Tohoku “who love music” with music-lovers at UNC Charlotte.

“Just let them meet, and a chemical reaction might happen.”

As a special advisor to the President of International Affairs at Tohoku, and a professor in the School of Education, Suematsu contacted the Office of International Programs to pitch the exchange.

“She reached out to us pre-pandemic,” said Rachel Ladenheim, assistant program director in the Office of Intercultural and Educational Experiences. “We said absolutely this sounds like a fantastic idea.”

Suematsu and Ladenheim found an eager partner in Wyrick, who developed the musical programming with The Charlotteans – first, in a virtual exchange last year, and then in person this year.

“It’s been such a pleasure to work with the music department and with Ginger,” said Ladenheim. “She is so inspiring,” agreed Suematsu (pictured below with Wyrick). “Having her on our team made it so successful.” 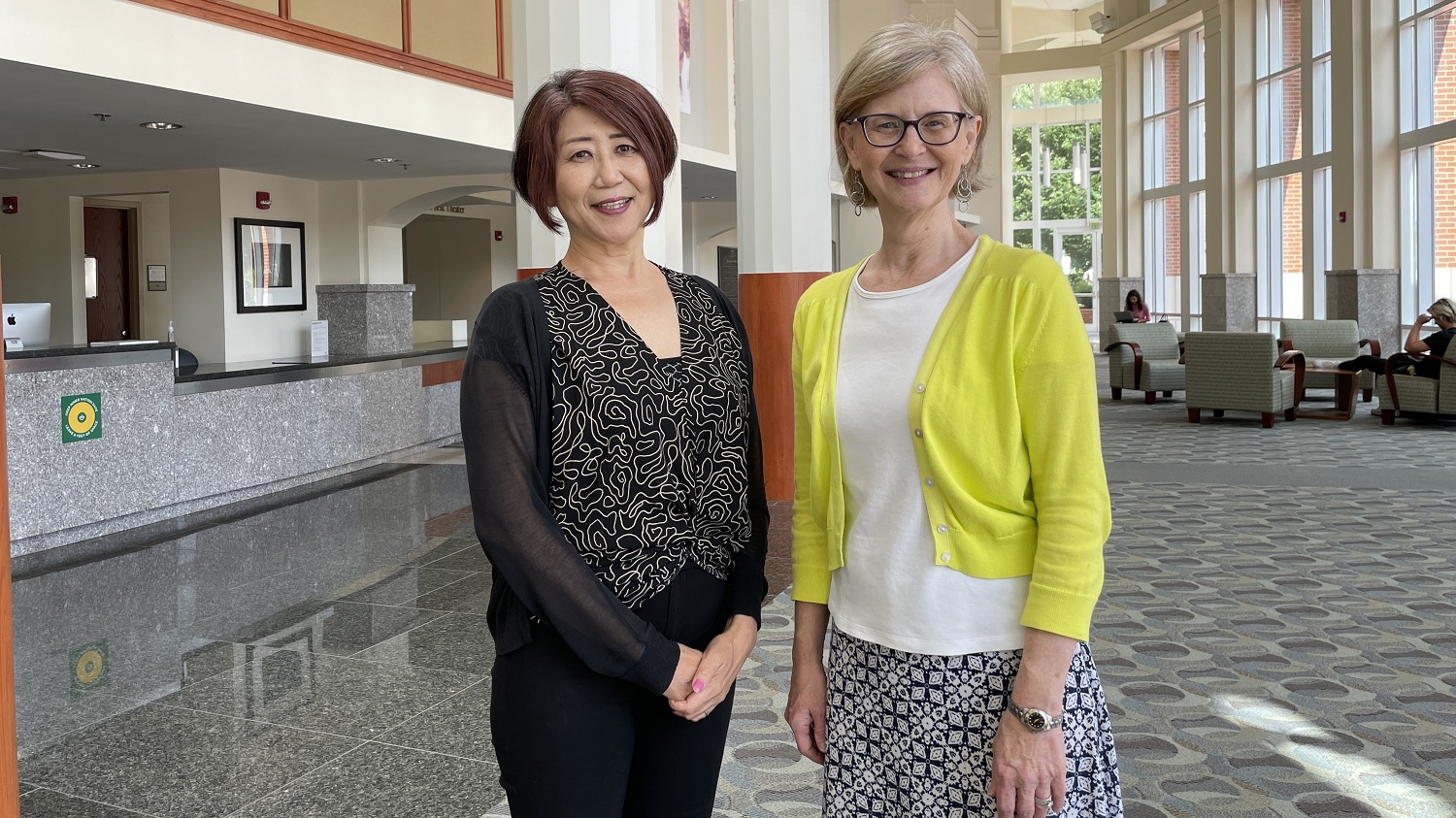 Wyrick created a wide-reaching curriculum that allowed students to engage with text and music from various American cultures. On one occasion, the students from Tohoku taught UNC Charlotte students a Japanese song and dance. And the combined chorus had a class led by composer Gwen McLeod Hall, whose piece “I Sing That My Voice May Be Heard” was among those the group performed.

“Through music they were learning each other’s cultures,” said Ladenheim.

Julia Charette is a music education major with a minor in Japanese.

“I think our residency would have been so much different without music,” she said. “Even though there was a slight language barrier, we were able to connect with one another through song. Music is a universal language, and it was amazing getting to experience their culture through singing and dancing.” 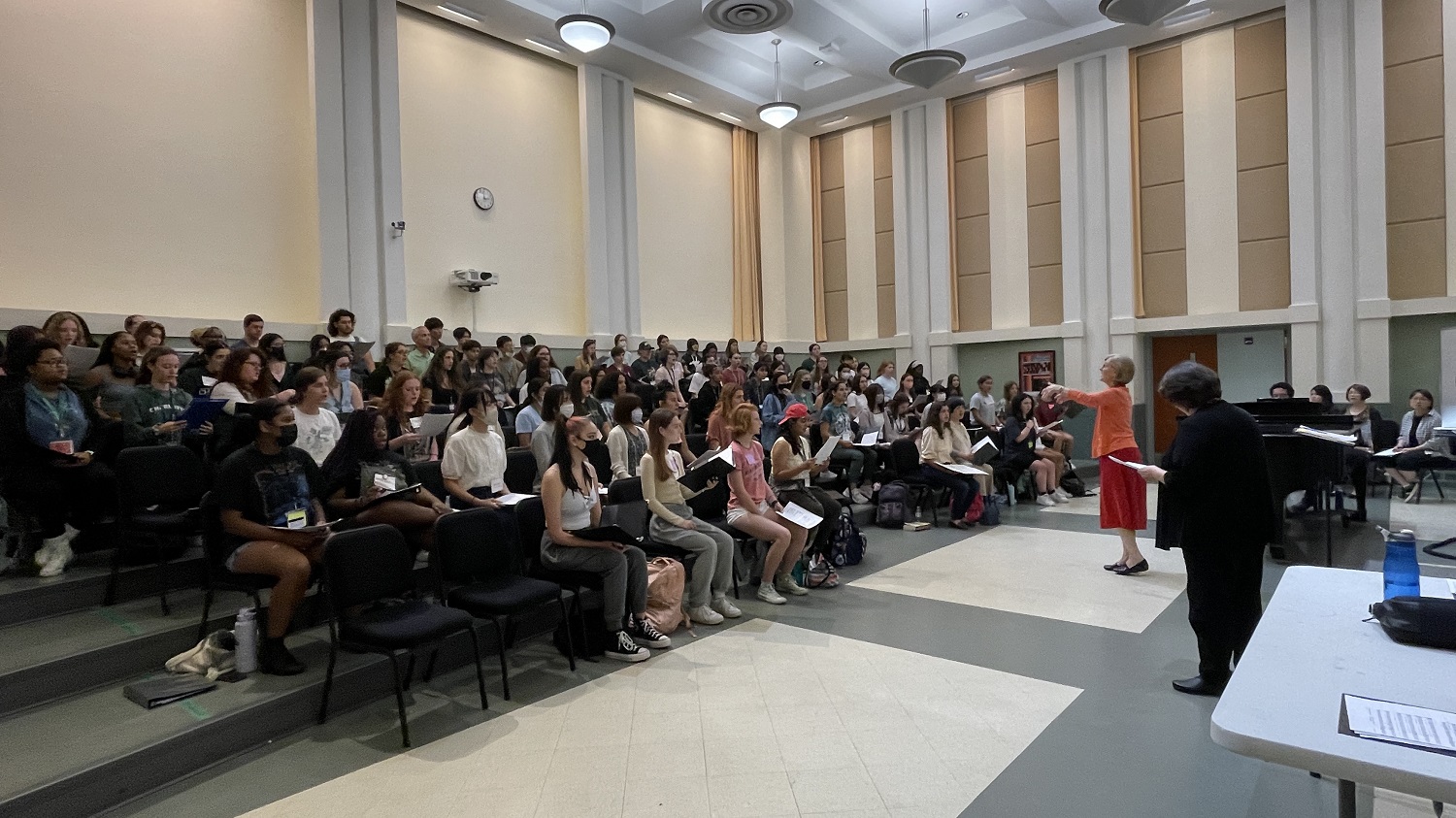 Wyrick was pleased with the hospitality her chorus members demonstrated to their guests.

“They were kind and welcoming and eager to build friendships that traverse disciplines, that traverse cultures and geographies," she said. "We’ve built a lifetime memory and an ongoing relationship with Tohoku University. Some of our students now want to consider travel and study at Tohoku.”

Charette (pictured in foreground below) is among those looking forward to a trip abroad.

“I am only in my third semester of Japanese, so there's a lot I don't know. The Tohoku students were so supportive and helped me practice as much as they could.  I plan on studying at Tohoku University this summer, so hopefully I will see them again soon!” 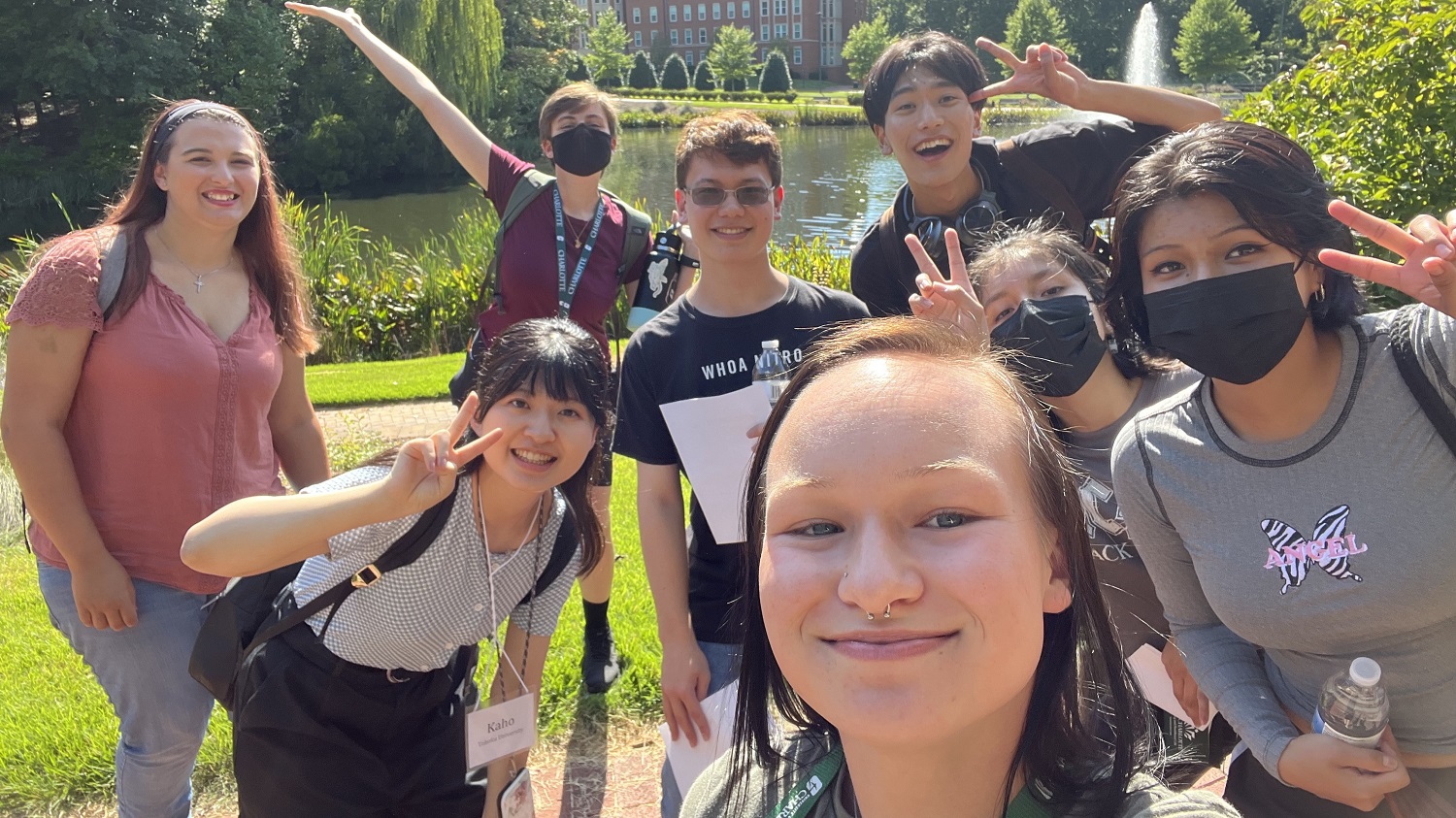 Suematsu said that the music-based study abroad program is unique for Japan. She plans to continue the program, and she and Ladenheim are already thinking about next year.

“That’s really our hope,” Ladenheim said, “to have this be an annual program.”

The exchange culminated in a closing ceremony and performance on Friday, September 9, in Rowe Recital Hall. That afternoon Tohoku student Masaya Habuchi reflected on his experience and the impact it had.

“When I first arrived in Charlotte, I was a bit confused about cultural differences. For example, I don't have to wear masks, which I love, or people – even strangers – would come to talk to us. We Japanese are a bit shy and so we had to get used to this. But now we are fine. When I go back to Tohoku University, I will try to be super friendly with people. I hope they will not think I am drunk.”

Habuchi said he learned much about American culture – “especially the North Carolinian culture” – and was enriched by activities both in and outside the classroom.

“I have made many new friends. All experiences I had here will be precious, forever.”