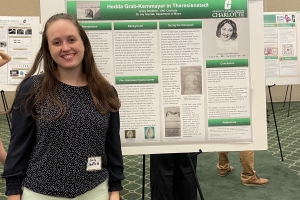 Wednesday, September 7, 2022
Emily Sheffield will present her paper at the Southeast Chapter meeting on October 1.

Senior music education major Emily Sheffield has been invited to present her paper, “Hedda Grab-Kernmayer and the Intersectionality of Gender and Cultural Identity in the Nazi Ghetto of Theresienstadt,” at the Southeast Chapter conference of the American Musicological Society. The conference will be held on October 1 at N.C. State University.

Sheffield began her research as an Office of Undergraduate Research (OUR) Summer Research Scholar, working under the mentorship of Dr. Jay Grymes, professor of musicology.

“Originally, the project was going to be a collection of transcriptions from the David Bloch Collection in the United States Holocaust Memorial Museum,” she said. “There is a collection of about 30 interviews that have never been transcribed. The first interview I stumbled upon was Hedda Grab-Kernmayer, and I latched onto her life, her story, and her witty personality. Grab-Kernmayer was an operatic mezzo-soprano and as a vocalist myself, I felt like I had a connection to her.”

During the Holocaust, Hedda Grab-Kernmayer (1899-1990) was one of the most prominent musicians in the Nazi ghetto of Theresienstadt (Terezín), performing regularly in the camp and organizing artistic activities for the prisoners. Her mixed cultural heritage – she was a Czech Jew reared in Vienna – and her diminished status as a woman resulted in the complete disregard of her contributions to life in the ghetto.

“Not much had been documented about her so I decided to dig a little deeper,” said Sheffield. “I found her story to be so unique, and with Dr. Grymes's support, I set out to chronicle her life while also challenging previous misogynistic and racist narratives that left out Grab-Kernmayer’s history.”

Sheffield, who will graduate this year, is a student teacher this semester at First Ward Creative Arts Academy, an arts magnet public elementary school in uptown Charlotte.

“I know that Grab-Kernmayer would have loved to see how much the kids love coming to music class, so I always think of her whenever I am singing with the students.”