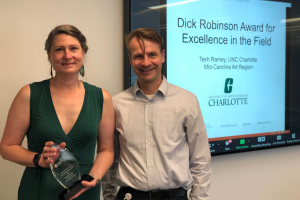 Monday, June 13, 2022
The College of Arts + Architecture received the 2022 Dick Robinson Award for Excellence in the Field

The College of Arts + Architecture has received the 2022 Dick Robinson Award for Excellence in the Field as the Mid-Carolina Regional Art Affiliate of the Scholastic Art and Writing Awards. The prestigious award is presented annually by the Alliance of Young Artists & Writers who manage the Scholastic Art and Writing Awards nationwide. The award recognizes an affiliate partner that demonstrates “extraordinary dedication to our shared mission and our commitment to diversity, equity, and inclusion; perseverance through challenges; and expanding access to the Scholastic Awards,” a statement from the Alliance states.

Next year, 2023, is the centennial anniversary of the Scholastic Art and Writing Awards. The Mid-Carolina Region will begin accepting submissions in September 2022. Regional winners will be announced in January 2023 and displayed in the Gold and Silver Key Exhibition hosted by the Mint Museum Uptown mid-March. More information about the Scholastic Awards is available at artandwriting.org.

Pictured above, Tesh Ramey with Chris Wisniewski, Executive Director of the Alliance for Young Artists & Writers, at the awards event.