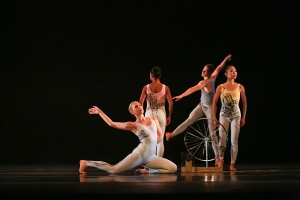 In 2015 Kim Jones, associate professor of dance, began the process of bringing Tracer back to life, a work that had not been seen for more than 50 years. Taylor choreographed Tracer, his 29th work, in 1962 and it premiered that year in Paris. It is one of 13 dances that he created with the great American artist Robert Rauschenberg.

During an extensive collaborative research process that culminated in a residency at UNC Charlotte, Jones worked with dancers of the Taylor 2 Dance Company, who premiered the reconstructed Tracer at UNC Charlotte on September 30, 2016 – its first performance since 1964. Read about the reconstruction process in The New York Times.

The Taylor 2 Dance Company subsequently performed Tracer in New York City at the 92nd Street Y on December 16 and 17, 2016. In his review for The New York Times, chief dance critic Alastair Macaulay praised Jones’s reconstruction work for its “instinct and imagination as well as research.” Tracer has since been accepted into the Taylor Dance Company repertory.

The reconstruction of Tracer was made possible with funding from the UNC Charlotte College of Arts + Architecture, Department of Dance, and Office of Academic Affairs and with grants from the Wells Fargo Foundation and the National Endowment for the Arts. Photo by Jeff Cravotta. Rauschenberg wheel sculpture reconstructed by Jeff Crawford.