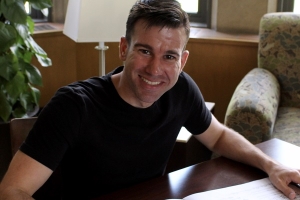 The Department of Music has announced that Hunter Kopczynski will join the faculty as Director of Bands and Assistant Professor of Music this fall.  He will conduct the UNC Charlotte Wind Ensemble, teach courses in conducting and music education, and oversee the university bands program.

Kopczynski comes to Charlotte after his role as Director of Bands at Mars Hill University (Mars Hill, N.C.) and teaching in the public schools of Virginia. At Mars Hill University, he coordinated the band program, conducted the Wind Symphony, and taught courses in conducting and music education. Additionally, he served as music director and conductor of the Asheville Symphony Youth Orchestra.

“After an exhaustive national search, I am pleased to announce the appointment of Dr. Hunter Kopczynski as our incoming Assistant Professor of Music and Director of Bands,” said Joe Skillen, chair of the Department of Music. “Dr. Kopczynski brings a wealth of musical and educational experiences, and we eagerly anticipate the growth of our bands under his collaborative leadership.”

At Mars Hill University, Kopczynski championed new initiatives like the MHU Honor Band and worked to expand the scope and reach of the bands. While at Michigan State, he was active in all aspects of the concert and athletic bands program. He was a director of the new music ensemble Musique21, assisted with the opera theater, and taught conducting. Additionally, he served the broader MSU community as a Leadership Fellow in the Graduate School.

He is an advocate for the expansion and development of the wind repertoire. In his research and teaching, Kopczynski is especially interested in the intersection of experience and curriculum to create healthy ensemble culture and teaching conducting as a means to facilitate musical dialogue. Recent artistic projects include collaborations with composers David Biedenbender, Anna Clyne, and Elena Specht; soprano Michelle Johnson; pianist Zhao Wang; Musique21 and the Maryland Chamber Winds.

A supporter and advocate for music education, Kopczynski taught middle school and high school band in the public schools of Virginia for seven years. While teaching, he was a leader in the Virginia music education community: frequently hosting and chairing many state and regional events, serving on committees, and as a District Chairperson for the Virginia Band and Orchestra Directors Association. He is an active adjudicator, clinician, and guest conductor and has presented at state and regional music education conferences. He holds professional membership in the College Band Directors National Association and the National Association for Music Education.