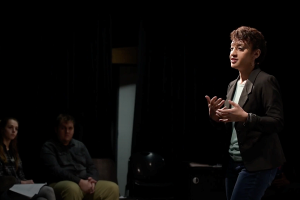 Wednesday, April 27, 2022
Kaja Dunn is a national leader in a new field in the theatre, film, and television industry.

In the past three years, Assistant Professor of Theatre Kaja Dunn has developed a national career in the new field of intimacy choreography.

Dunn, who teaches acting at UNC Charlotte, is associate intimacy director for the Broadway production of A Strange Loop, a Pulitzer prize-winning musical that opened on Broadway this week (April 26). She is also the intimacy choreographer and fight director for the Denver Center for the Performing Arts regional production of Choir Boy – running April 22-May 29 – and a lead intimacy coordinator on the set of the NBC series Best Man, which will begin airing on Peacock in September.

While fight choreography – staging combat scenes – has been practiced since antiquity, intimacy choreography – choreographing sex scenes and other physically intimate actions on stage and screen – has become more common only in the past few years, since the #MeToo movement started.

Dunn works with writers, directors, lawyers, actors, costumers, and stage managers to help create a safe space and set appropriate boundaries for actors in intimacy scenes. That involves, among other things, developing non-sexualized language for directors to use, ensuring that costuming provides protection when necessary, and putting practices into place that create consistency in actions throughout each iteration of a scene - whether across filming or across the run of a show.

In Choir Boy, for example, there is a scene in which two characters kiss in a shower.

“It’s about creating protocols,” she says. “Knowing who people are and respecting their boundaries.”

Dunn’s particular expertise is in race and intimacy, and she is one of only a few people in the world with that specific research and practice. All three of the current projects – A Strange Loop, Choir Boy, and Best Man – deal with Black intimacy. That expertise allows her to help writers and directors avoid negative cultural tropes in scripts and characterizations and offer advice on cultural nuances.

And not only does Dunn work on multiple sets, but as the Equity, Diversity, and Inclusion Specialist for Theatrical Intimacy Education, a consulting group specializing in researching, developing, and teaching best practices for staging theatrical intimacy, she leads trainings and workshops in the U.S. and abroad.

Dunn’s work in the field is rooted both in her own past experiences on stage and in the classroom, where, she says, she has worked for years to create safe spaces for students – especially students of color.

“I have had a consent clause in my acting classes since 2011. Students don’t have to engage in any physical behavior or language that violates their boundaries.”