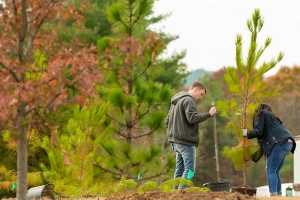 The implications of those rather shocking numbers plagued Jeff Balmer, associate professor of architecture and director of the School of Architecture Rome program, as he made flight arrangements for the 30 students who will travel to Rome in January for their semester in the Eternal City. Ultimately, he was spurred to action. Working with University Sustainability Officer Mike Lizotte and the Department of Facilities Management, Balmer organized a tree-planting activity on campus, and on November 22, he and the Rome program students planted 30 trees on the campus front lawn next to the new Gage Undergraduate Admissions building.

It is the beginning of a new tradition, Balmer says. “Prior to their departure, each of our Rome-bound students will plant a tree – not only to offset the environmental impact of their flight, but also to commemorate their semester in Rome, a pivotal experience in the education of architects.” 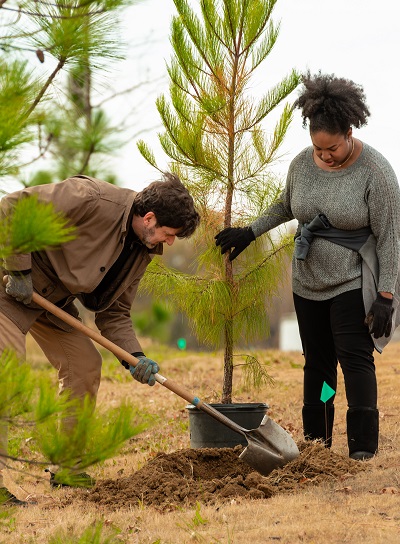 It also marks the initiation of a commitment in the College of Arts + Architecture (CoA+A) to carbon offset measures for CoA+A study abroad programs. This spring, students from across the CoA+A who are traveling overseas will plant trees or engage in other activities guided by the University’s sustainability office. The College is also working with Lizotte and the Office of International Programs to determine ways to educate students about the environmental impact of foreign travel and to mitigate the carbon footprint of travel over the long term.

“Global education is among the five platforms upon which the College builds curricular, scholarship, and engagement strategies, but so is environmental sustainability,” says Dean Brook Muller. “We at UNC Charlotte don green, and as my thoughtful colleague and Interim Director of the School of Architecture José Gámez puts it, as 49'ers, we should give thought to what the year 2049 might look like.”

In fact, the University of North Carolina system as a whole is giving thought to what 2049 – or 2050 – will look like. “The UNC Sustainability Policy states that all campuses should reach carbon neutrality by 2050,” says Lizotte, adding that since 2009, Chancellor Dubois has maintained this goal as part of his President's Climate Leadership Commitment pledge with Second Nature, a non-profit organization that advances climate action in and through higher education.

"The carbon footprint of a campus includes all official activities, so we include our travel for research or study abroad. I thank Jeff Balmer for raising awareness in his students about the contribution of air travel to climate impacts, as well as showing them we have ways to reduce impacts on the environment."

Lizotte says that the species of trees that the students planted in November could each remove three to six tons of carbon dioxide from the air as they grow to maturity in the next 40 years. Balmer hopes they will also become a touchstone for his students.

“It’s my hope that the growth of ‘their' tree on campus will provide our Rome alums with a tangible and enduring connection to UNC Charlotte, and a reminder of their collective commitment to environmental stewardship in architectural practice.”