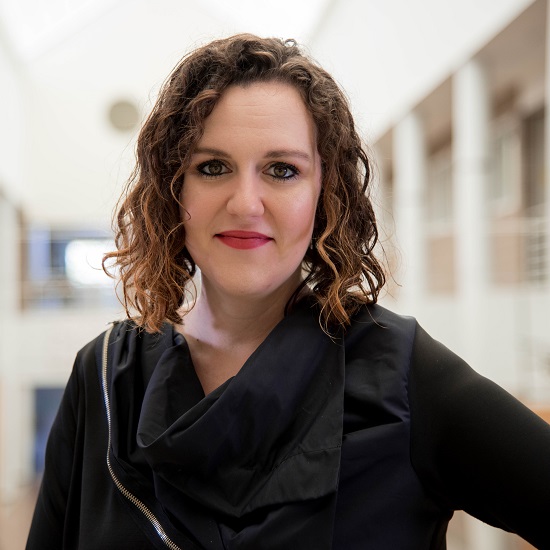 Robots in the architecture
Assistant Professor of Architecture

When Assistant Professor of Architecture Rachel Dickey says she has taught “all over the curriculum” since coming to the School of Architecture three years ago, she’s not exaggerating. Second and fourth year undergraduate studios, graduate studios, computational methods – all of these have been in her schedule. But her Spring 2020 seminar was no doubt the quirkiest: “Robots, Cyborgs, and Architecture.”

Dickey taught that class first at Cornell University, where she was a visiting professor for the Fall 2019 semester. It represents her self-described fascination with “how technologies are integrated into our environments – not just as a tool for design” and builds on her previous experiences teaching robotics in Glasgow, Scotland, in the summer of 2018 and in her Fall 2018 computational methods class at UNC Charlotte, which ended with a high-stakes robot runway show and battle in Storrs Salon.

Technology, and “how it affects the way we occupy space,” is a subject of her research, too. In the spring of 2018, Dickey turned Storrs Gallery into “a petri dish” of experimentation with her interactive installation, Air Hugs. The “Air Hugs,” 12-foot-long massive mylar balloons that hung from the ceiling, turned the gallery into a “sensing environment” that responded to visitors by “inhaling and exhaling,” creating “a socially enveloping brilliance of reflection and light.” 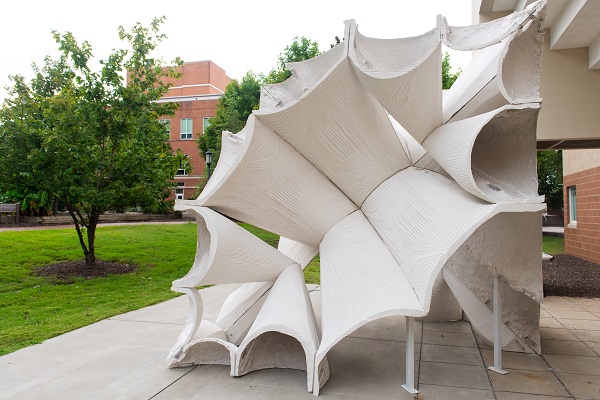 More recently, she led a research team in Allotrope Architecture, experimenting with new ways to use Glass Fiber Reinforced Gypsum (GFRG) and new approaches to creating variation out of repetition. The project resulted in the construction of a pavilion outside of the Storrs building, created with GFRG panels fabricated through a process involving CNC milled foam positives which were then used to produce molds with a two-part silicon and fiberglass support shell. Among the research questions was an investigation into indeterminacy in the fabrication process: “How do we allow for mistakes and imperfections in technology?”

This work may seem like far cry from her junior high school project, in which Dickey built an entire site model of an English manor. (“It was probably really hideous,” she says.) But she says that interest in making things, and in “a crossbreed between science and the art world,” led her to architecture school at Georgia Tech, where she completed undergraduate and graduate degrees in 2011. She stayed in Atlanta following graduation and ended up working at a new design and fabrication studio, Formation Studio, where she helped create large-scale public art works. She returned to school two years later to get a Master of Design Studies degree with a concentration in technology from the Graduate School of Design at Harvard University.

Dickey says she has found “tremendous support” at UNC Charlotte for her investigations and “interest in pushing the boundaries.” Her Allotrope Architecture project, for example, was funded by a Faculty Research Grant, and her team included the Fabrication Lab staff, graduate students, and undergraduate students. “I’ve had the opportunity to work with incredible students,” she says.

And her knowledge of technology and public art has also brought opportunities to shape the public art landscape in Charlotte. She has sat on two commissions with the Arts & Science Council. “It’s been incredibly meaningful to me to have a voice in that,” she says, “to contribute to the growth of the city.”