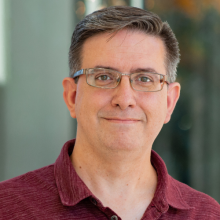 Tom Burch is the Associate Professor of Scenic Design and the Associate Chair of the Department of Theatre. Before joining UNC Charlotte in the fall of 2014, he taught at Ithaca College (NY) and for several years in the Theatre and Performance Studies Program at the University of Chicago, as well as working as a freelance scenic designer based in Chicago. He holds a BFA in Theatre Design from the University of Kentucky, a Post- Graduate Diploma in Drama History from the University of Bristol, England (while on a Rotary Foundation Ambassadorial Scholarship), and an MFA in Stage Design from Northwestern University where he specialized in Scenic Design.

Chicago area design credits include: SUCKER PUNCH (Victory Gardens Theatre), TALKING PICTURES, GAS FOR LESS, the Horton Foote Festival and THE HAIRY APE (Goodman); SPUNK and COMEDY OF ERRORS (Court Theatre); TEN CHIMNEYS, SOUVENIR, A CIVIL WAR CHRISTMAS,  and many others (Northlight); He’s been a frequent collaborator with The Hypocrites, having designed such shows as the 12-hour play cycle, ALL OUR TRAGIC, WOYZECK, FRANKENSTEIN, NO EXIT, THESE SEVEN SICKNESSES, as well as innovative and immersive takes on the Gilbert and Sullivan operettas PIRATES OF PENZANCE, HMS PINAFORE and THE MIKADO, which have toured extensively across the US (Boston, Louisville, Chicago, San Francisco, DC).

He is an active member of United Scenic Artists Local 829 (the professional union for stage designers), US Institute for Theatre Technology, OISTAT (the International Association for Stage Designers and Technicians), and is joining the regional leadership team for the Kennedy Center/American College Theatre Festival.

Research interests include design for non-traditional performance spaces, immersive and site-specific theatre, and contemporary puppetry. His work can be viewed online at www.tomburch.com.