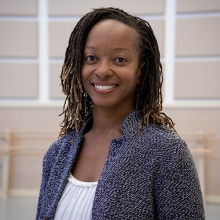 Associate Professor, Tamara Williams earned her BFA in Dance from Florida State University and received her MFA in Dance from Hollins University in collaboration with The American Dance Festival, The Forsythe Company, and Frankfurt University. She is a certified GYROTONIC(R) Trainer, Reiki Practitioner, and capoeirista.

Williams has trained intensely in Salvador da Bahia, Brazil in Silvestre Technique and African Brazilian dance. She is a 2012 recipient of the Artist Residency Fellowship at the Dance & Performance Institute in Trinidad, a 2013 recipient of the Harlem Stage/Aaron Davis Hall Fund for New Work grant, and a 2014 and 2015 Community Arts Fund Grantee by the Brooklyn Arts Council. In 2015, Moving Spirits, Inc. was accepted as Company-in-Residence at the Jamaica Center for Arts & Leadership in Jamaica, Queens. Williams was a 2015 Turkey Land Grove Foundation recipient in which she participated in a seven-day dance writing residency in Martha’s Vineyard, and a 2015 Fall Space Grant recipient, awarded by the Brooklyn Arts Exchange. She is a recipient of the Digital Making Grant from UNC Charlotte's College of Arts + Architecture and several Mini-Diversity and Chancellor Diversity Challenge Fund grants from UNC Charlotte’s Diversity Fund. She has received two Faculty Research Grants to further her studies of African American ring shout traditions in the Carolina’s low country and West Africa. Williams has received several Culture Block grants from Mecklenburg County’s Arts and Science Council to offer free African Diaspora dance and music programming for communities around Charlotte. In 2020, Williams was awarded the College of Arts + Architecture 2020 Board of Governors Teaching Award.

Williams’ research has been published in The Dancer-Citizen Journal and her book Giving Life to Movement, analyzing African-Brazilian dance histories and cultures, was published by McFarland Press in 2021. Her monograph, The African Diaspora and Civic Responsibility: Addressing Social Justice through the Arts, Education and Community Engagement, is currently under contract with Lexington Books. This latter text investigates how African American, African-Brazilian, Haitian, and Latinx artists and scholars address civic responsibility and social justice issues through the arts. Williams’ research on African American Ring Shout traditions has been disseminated at several colleges and universities in the United States and Brazil. Her article, "Reviving Culture Through Ring Shout," was published in the scholarly journal, The Dancer-Citizen.

Williams has researched and developed various community programs focusing on marginalized people in New York City and Charlotte. The programs provide opportunities for underserved communities to learn and practice dances of the African diaspora; histories and cultures which are strategically neglected in US education systems.