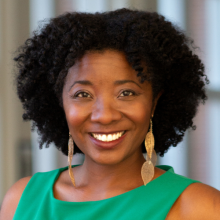 Dr. DuBose serves as Assistant Professor of Classical and Contemporary Voice at UNC Charlotte and serves as Co-Coordinator of the Musical Theatre Certificate Program. Her research is centered on the impact of genre fusion and improvisation in 21st-century operas on vocal pedagogy and performance practice. Her interests span to include hybrid works that incorporate contemporary commercial music, musical theater, and music of the African diaspora. In 2022 she launched her debut album entitled Blurred Lines: 21st Century Hybrid Vocal Literature on the Albany Records label.

An interpreter of contemporary and hybrid works, Dr. Sequina DuBose performed in 2022 with the Virginia Arts Festival in two chamber operas, Companionship by Rachel Peters and Tales From the Briar Patch by Nkeiru Okoye. She also performed last season as Donna Elvira in Eve Summer’s modern adaptation of Mozart’s Don Giovanni with Opera Carolina. She looks forward to performances as Clara in Gershwin’s Porgy and Bess with Opera Carolina in 2023. Other recent highlights include a 2021 performance as soprano soloist with the Tulsa Symphony, Wynton Marsalis, and the Jazz at Lincoln Center Orchestra in Tulsa Oklahoma at the BOK Center (19, 199 seat auditorium) in commemoration of the 100th anniversary of the Tulsa Race Riots, and in 2020 several live-streamed virtual concerts as soloist with Opera Carolina as part of the iStream Virtual Concert Series and a collaboration with the Mint Museum entitled: Voice and Vision Live at the Mint.

With 2019 came the world-premiere of Elegy: In Memoriam of the Emanuel Nine by Leonard Mark Lewis, a work for soprano soloist and chamber orchestra dedicated to the lives lost in the tragic shooting at Emanuel AME Church in Charleston, South Carolina, on June 12, 2015.  Additionally, Dr. DuBose created the role of Philomena in the world premiere performances of the electronic chamber opera, Nightingale and the Tower (Jason Treuting, Rebecca Comerford, Beth Meyers, Mikael Jorgensen). The work’s neo-classical score featured adult singers, a children’s ensemble, orchestra, synthesizers, and a long-string harp coined “Sonic Butterfly” by artist Andrea Brook; demonstrative of the movement toward technology integration in 21st-century hybrid works on the operatic stage.

Additional distinctive engagements include: performances as a soloist and ensemble member in Underground Railroad: A Spiritual Journey, a concert series that culminated in a performance at the Metropolitan Opera with international opera icon Kathleen Battle; a debut with Michigan Opera Theater as 4th Maidservant in Strauss' Elektra; and performances with both the Lyric Opera of Chicago and Royal Danish Opera as Annie in Gershwin’s Porgy and Bess. Dr. DuBose also sang 40 consecutive performances as Clara in the 75th Anniversary National Tour of Porgy and Bess where critics raved, “her lovely lyric soprano spun Summertime winningly…she gave unusual stature to Clara as a figure of tragic grandeur” (South Florida Classical Review). As Clorinda in Rossini’s La Cenerentola with Opera Memphis, critics praised her portrayal of the wicked stepsister as one of “incessant vanity”, with both sisters praised for characterization “conceived as zany grotesques…as colorful as their voices” (Memphis Commercial Appeal). Additionally, Dr. DuBose has portrayed Musetta in Puccini’s La Bohème, reprised the role of Clorinda with Dicapo Opera, and portrayed Rachel in the world premiere of Nkeiru Okoye's folk opera Harriet Tubman: When I Cross That Line to Freedom with American Opera Projects in New York City. Dr. DuBose has also performed with the Opera Company of Philadelphia and Utah Festival Opera and Musical theatre Company. Other performed roles include Pamina in Mozart’s, The Magic Flute, Erisbe in Cavalli's L'Ormindo, Lauretta in Puccini's Gianni Schicchi, Nanetta in Verdi’s, Falstaff, and both Susanna and Countess in Mozart’s, The Marriage of Figaro.

A versatile actress and crossover artist, Dr. DuBose have performed as Cleopatra in an Off-Broadway production of Shakespeare’s Antony and Cleopatra, as Lady in Blue in ArtsCentric’s production of For Colored Girls Who Have Considered Suicide When The Rainbow is Enuf, as Chloe in a New York Musical Theater Festival reading of 7:32, The Musical, and as Deena Jones in the hit musical Dreamgirls.  She has performed as an ensemble member in Most Happy Fella and Showboat with Utah Festival Opera & Musical Theatre Company. She has also toured as a soloist with The American Spiritual Ensemble and with Chorale Le Chateau alongside famed trumpeter Wynton Marsalis and Jazz at Lincoln Center Orchestra (JLCO) performing his work, Abyssinian Mass. She was a finalist in the Kurt Weill Foundation Lotte Lenya Vocal Competition, and placed third in the prestigious American Traditions Competition.

Sequina DuBose has served as the Director of Development for ArtsCentric, an African-American-led theater company, since 2016 (www.artscentric.org). In this role, she has successfully coordinated with board and company members to write and submit grant proposals resulting in over $100,000 in funding to date. She continues to serve as a board member for ArtsCentric and is also the current Board Vice-President and Director of Development for The International Florence Price Festival (www.pricefest.org).

A Detroit native, Dr. DuBose received her bachelor’s degree in Music from Morgan State University, a Master of Music degree in Vocal Performance from George Mason University and an Artist Certificate in Vocal Performance from Manhattan School of Music. Dr. DuBose completed her doctoral degree in Vocal Pedagogy at the University of Maryland College Park where she was a member of the inter-departmental I.D.E.A. Committee (Inclusion, Diversity, Equity, and Access) and studied with the late renowned opera singer, Carmen Balthrop.

Dr. DuBose continues her work as an arts advocate, educator, and administrator while maintaining an active concert and performing arts career. She is a member of the American Guild of Musical Artists and serves as faculty advisor for Sigma Alpha Iota International Music Fraternity. For more information visit www.SequinaDuBose.com