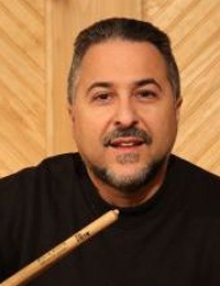 Born in Brooklyn, NY, Rick Dior began his professional music career at the age of thirteen, freelancing in and around the metropolitan area in various small ensembles, orchestras, and theater productions. He is a graduate of the Manhattan School of Music where he studied with timpanist Fred Hinger and jazz composer Bob Mintzer. He also studied extensively with famed jazz drummer Joe Morello.

His recording credits are extensive and include CD releases, movie soundtracks, and commercial radio/television spots. As an engineer and producer, Rick has been involved in hundreds of recordings. These include recording projects with artists such as Branford Marsalis, Delfeayo Marsalis, Ellis Marsalis, Ed Thigpen, Harry Connick Jr., Micheal Spiro, Joey Calderazzo, Michael Carvin, and Jimmy Cobb.

Rick is a very active educator and has served as Lecturer of Percussion at the University of North Carolina at Charlotte since 2001. He also maintains a busy private and online teaching studio. His students have gone on to attend many prestigious music institutions such as The Julliard School of Music, The Manhattan School of Music, The Cincinnati Conservatory, The Oberlin School of Music, The Eastman School of Music, North Texas State University, and The University of Miami. Many of these former students are active as professional musicians and teachers. As a composer, Rick has written many compositions for percussion ensemble, orchestras, and jazz ensembles. In 2018, Rick was commissioned to orchestrate his composition Science Fiction for a tour of the National Youth Orchestra of Great Britain. His compositions are published by Tapspace. Rick currently has endorsements with Vic Firth Drumsticks, Mike Balter Mallets, Paiste Cymbals, and Doc Sweeney Drums. Visit his Youtube channel.