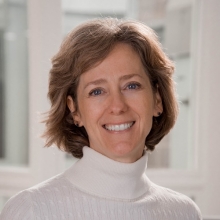 Before joining the College of Arts + Architecture, Meg Freeman Whalen served as the Director of Public Relations and Community Engagement for the Charlotte Symphony. Prior to joining the Symphony, Meg was a freelance music and dance writer for the Charlotte Observer, Charlotte Viewpoint, and Classical Voice North Carolina and the arts editor for Charlotte magazine. She also taught in the music department at Queens University of Charlotte from 1994 to 2013, where her courses included Music in America, Film Music, Music Appreciation, Music in Society, From Jazz to Rock and Roll, and Women in Music.

Meg is the author of a short history of the Charlotte Symphony Orchestra, The Sound of Charlotte: The First 75 Years of the Charlotte Symphony, and contributed the Foreword for North Carolina Musicians: Photographs and Conversations by Daniel Coston (McFarland Press, 2013).  She has presented papers at regional and national conferences of the College Music Society, the North Carolina Association of Historians, the Society for American Music, and the Association for the Advancement of Sustainability in Higher Education and has published in scholarly journals such as the Journal of the Conductors’ Guild, the Journal of the North Carolina Association of Historians, and Women of Note.