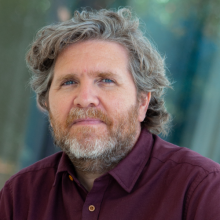 Jay Morong is an educator, film programmer, director, actor, and theatrical video designer. His theatrical video design work includes Hamlet, The Purple Flower, The Colored Museum, The Winter's Tale, Nocturne and [sic] all at UNC Charlotte; Tales of the Lost Formicans at the University of Massachusetts at Amherst, and Requiem For New Orleans at the New York International Fringe Festival. He has directed several productions at UNC Charlotte including, The 25th Annual Spelling Bee, Mauritius, The Aliens and It’s A Bird, It’s A Plane, It’s Superman … The Musical.

Jay earned his Master's Degree in the Philosophy of Film and Theatre from Boston University and Bachelor of Arts Degree in Philosophy from Assumption College in Worcester, MA.

As a theatre & film studies instructor, his primary focus is on the relationship of digital media to performance and culture and the relationship of theatre to society.  He is also an affiliated faculty member in the Film Studies Program and the Digital Arts Center. Jay also works as a film projectionist at the Manor Theatre in Charlotte, as Program Director for the Charlotte Film Society, as Programming Director of the Charlotte Film Festival and as a Special Events Film Programmer at the Somerville Theatre in Somerville, MA.

Full disclosure, he is a huge Red Sox fan!