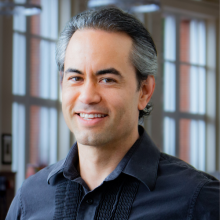 Dr. Brian Arreola is Professor of Voice & Opera Workshop at UNC Charlotte. He has appeared in lead and supporting tenor roles with opera companies across the US and Europe, including Minnesota Opera, Opera Theatre of St. Louis, Opera Carolina, Toledo Opera, New Orleans Opera, Grachtenfestival (Netherlands), Iford Opera (UK), and others. His singing of the standard operatic canon has been met with critical praise, with the Washington Post hailing him as a “ringing and handsome tenor,” in the 2019 In Series production of Madama Butterfly. The Toledo Blade enthused of his 2016 appearance as the title character in Toledo Opera’s Roméo et Juliette, “Tenor Brian Arreola created a Roméo whose persona churned from petulant adolescent to ardent lover, and finally impetuous hero. His voice was rich, lyric, and particularly expressive in the final death duet.” Dr. Arreola seeks to advance the work of composers from underrepresented groups, appearing in productions of Terence Blanchard’s “Opera in Jazz,” Champion, collaborating with Vietnamese-American composer P.Q. Phan on multiple operas and concerts, and recording a CD of songs by Asian and Asian-American composers, released by Albany Records in 2019. Dr. Arreola’s UNC Charlotte students have been national prizewinners in the National Opera Association’s Opera Production Competition and the National Association of Teachers of Singing Student Auditions. They have received graduate fellowships at Indiana University, Louisiana State University, UW Milwaukee, and Arizona State University, and are working in the Charlotte region and beyond as educators and performers.