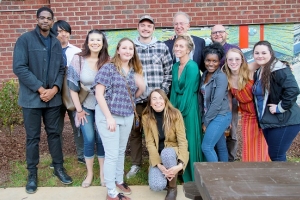 On October 18, the Arlo apartment building on West Morehead Street held a street festival to celebrate murals created by students from the Department of Art & Art History. The students, under the direction of professors Maja Godlewska and Erik Waterkotte, researched the neighborhood near the apartment building for inspiration and created 10 murals using digital print-making and hand-painting techniques.

The murals were commissioned by Jason Jacobson, a regional partner with ArchCo Residential, who initiated the mural project when city planning officials suggested using artwork to articulate a brick wall along Summit Avenue and Bryant Street.

Jacobson, who had previous experience with public art installations on some of his projects, felt some type of integrated art installation would be more meaningful to residents and the surrounding community than anything that could be done architecturally.

“Once we were committed to going down that road, my objectives were for the art to have a local connection and the involvement of young people who could bring energy to the project and benefit from the opportunity to work on this type of project,” he said. “I received a lot of good advice from members of the local arts community and then fortuitously found Maja Godlewska at UNC Charlotte, who was very excited about the opportunity.”

Here Jacobson reflects on the project and his firm’s involvement with UNC Charlotte students and the Wesley Heights community: 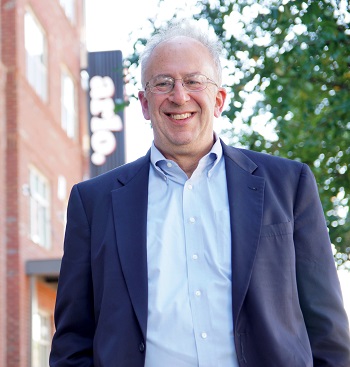 Were you surprised by the passion and understanding of these college students?

Not really. Having coached youth baseball for 16 years and raised three kids, now ages 21 to 29, I have seen how much energy young people can bring to a project that motivates them. Still, when I first met the students and saw the early renditions of their work, I was impressed with their creativity and commitment to learn about the neighborhood and translate that into some very creative art.

Can you describe your goal for this project? Is it primarily decorative or is there a deeper meaning?

On a superficial level, it’s about enhancing the aesthetic of a part of our building that otherwise might not attract much attention or even feel somewhat like a “backside.” But it also was important to us to create a positive pedestrian experience for the neighborhood and to link Arlo to that neighborhood and the larger Charlotte community as part of being a good neighbor.

Was it important for the students to research the Wesley Heights community before tackling the project?

I think there might have been other ways to approach it and, in the future, our idea is to rotate other art installations in to those spaces. The mounting detail was designed to make that easy. For the inaugural installation, it was a perfect approach since it sets the tone of honoring the rich history of the FreeMoreWest and Wesley Heights neighborhoods. In my discussions with Maja and Erik, acknowledging the area’s history was one of the objectives, and I was really pleased with the effort the students put in to do that.

I understand you commissioned them to do this. What does this say about giving them real-life experience?

They had to deal with certain demands like fixed dimensions of the spaces, making the art visually appealing for pedestrians and drivers, using materials that would be durable in an outdoor setting, being creative without offending groups of people and keeping to a schedule.

Did they need to meet deadlines, present proposals and meet other real-world demands?

We wanted to give them as much flexibility and leeway as possible to not restrict their creativity. However, we did have two sessions with the students where they presented their progress to me as well as an informal advisory group I had assembled which was composed of Neely Verano, owner of the nearby Latin American Contemporary Art (LaCa) Projects, Laura Grace with the Public Arts Commission and Todd Stewart with Arts & Science Council.  They were extremely helpful in advising me on this project and providing feedback to the students in these two sessions.

What do you think this project gave to the students?

I hope it gave them the opportunity to use their creativity and teamwork to produce a product that will be out there in the public domain for all to see. The work they did will be not only for limited consumption in a classroom or school gallery but an exhibit that will enhance a building and its neighborhood. They should be proud of that.

How about the area residents? Does it resonate with them?

We have had good feedback so far but mostly from our construction team and the initial residents to move in to Arlo. I expect more people to notice over the coming months, particularly after our October 18 unveiling.

Finally, how about you and your partners? Can you tell me what it meant for you other than paying another contractor?

The three firms that make up the development team include my company, ArchCo Residential, Bluerock Real Estate and Southern Apartment Group.  I think I can speak for all of us in saying that, when you add something to a building that makes it more attractive and interesting to the general public, and not just the building occupants, there is a sense of pride in doing that. One of the principals at Bluerock is a Charlotte native, and Southern Apartment Group is a local real estate developer who actually sold us this land and had the foresight to take it through a zoning process to permit the multifamily use. While I live in Washington, DC, I went to graduate school in the 1980s at UNC–Chapel Hill and had (and still have) friends from Charlotte. So it is satisfying to add an element to the building that is visible to the larger community. It might have been easier to incorporate that “articulation” with architectural features and let the contractor build it, but this was much more satisfying to me.

Did it meet your expectations?

I am sometimes guilty of having low expectations and worrying too much about failure. With that said, when I finally saw the finished product installed on the building, I was thrilled. I thought we had collectively hit a home run and that the project succeeded on many levels.