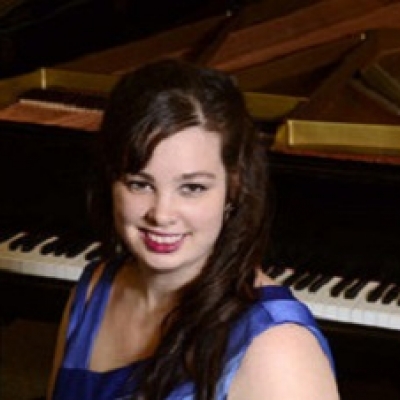 After completing her Master's degree in composition at UNC Greensboro, Elizabeth returned to Charlotte, where she teaches piano, flute, and composition and theory in her own private studio, as well as music classes at Central Piedmont Community College. In 2012, her work Moon Garden (for guitar and clarinet) received third prize in the National MTNA Composition Competition. Another piece composed for cello, electronics, and dance, Triangle Shirtwaist Factory Fire, won a national award and was performed at the Kennedy Center in May of 2012.

Elizabeth founded the Charlotte New Music Festival and Composers Workshop in 2012. Through this summertime festival and composers' and choreographers' workshops, she is building an appreciation for new music in her hometown and providing excellent learning and performance opportunities for emerging composers.

"On a daily basis, I use what I learned at UNC Charlotte -- composition and arranging, conducting, knowledge of how to write for other instruments that I don't play, music theory, music history, choral singing," she says. "I treasure the memories of playing as a solo pianist with the wind ensemble at UNC Charlotte and travelling to Italy with the UNC Charlotte Chorale to sing in the Vatican and many other Italian cities. Other meaningful experiences were taking piano lessons, composition lessons, performing in the flute choir."

Elizabeth was named the 2018 Distinguished Alumna in the Department of Music.

In 2018, we interviewed Elizabeth for the College of Arts + Architecture's 10th anniversary. An excerpt from our digital publication, CoA+A Community is below. 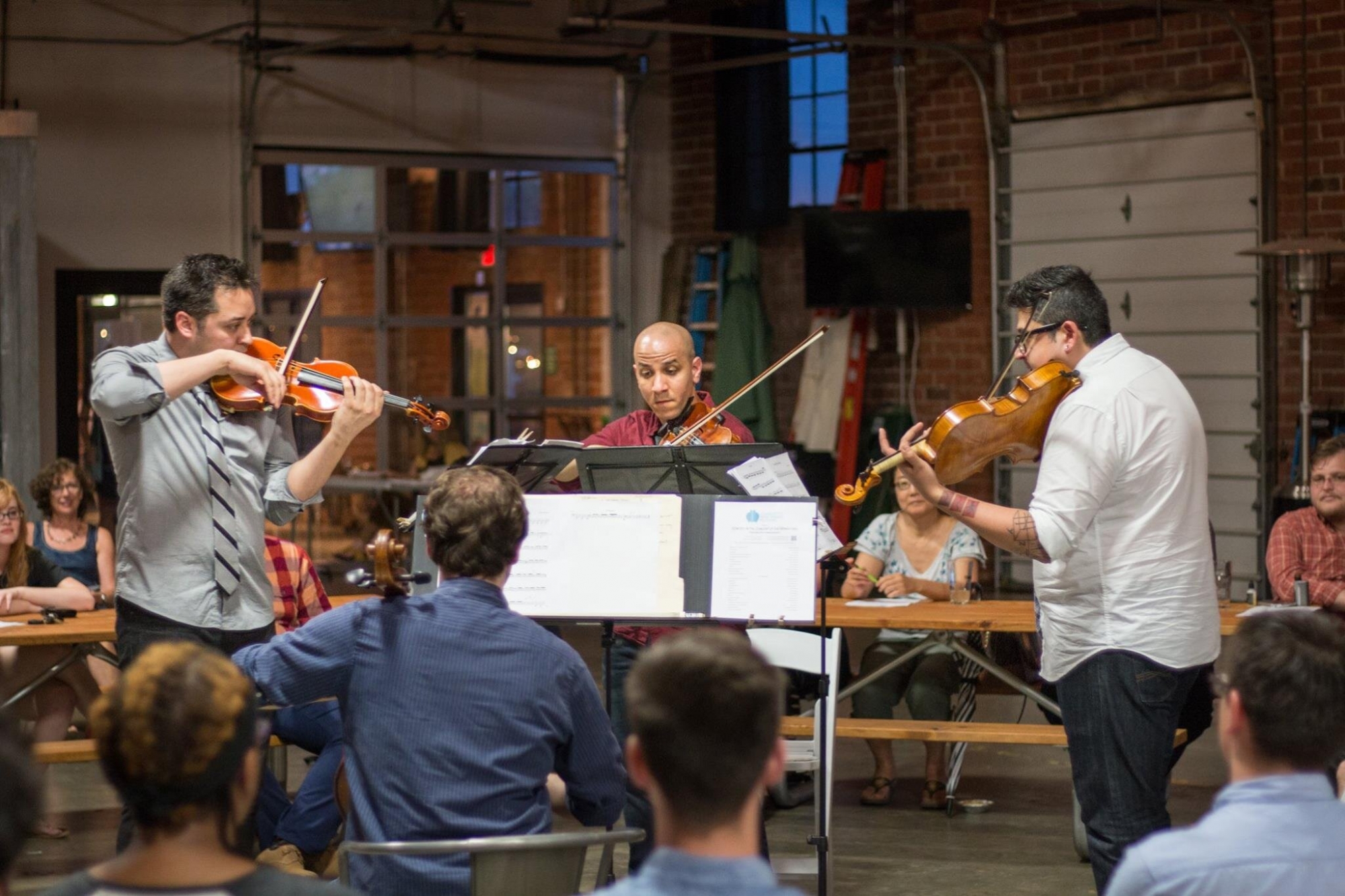 “This last festival was the first one that I didn’t say ‘I was never going to do it again.’”

In 2012, Elizabeth Kowalski (bachelor of music, 2009) started the charlotte new music festival, a contemporary classical music workshop, and concert series. From 12 composers and three concerts the first year, the program grew to 34 composers—ranging from undergraduates to Ph.D. candidates to professionals—and 12 concerts in 2017.

WHAT PROMPTED YOU TO LAUNCH THE CHARLOTTE NEW MUSIC FESTIVAL?
I was looking for something like this to go to and attend so that I could work with really great musicians. I had awesome student musicians at my graduate school (UNC Greensboro), but I really wanted to work with professionals. And I wanted to work with dancers and learn more about writing for dance. I asked people in different parts of the country and in other countries, and nobody had a program like that, that combined the two.

But most important was the quality of the musicians that I wanted to work with. Other programs with professional musicians were either super competitive or super expensive. So I thought if I could just organize a group of people like myself, we could pool our resources and have our own thing.

WHAT IS YOUR MISSION?
The Charlotte New Music Festival serves a few purposes: First of all, it helps younger composers who don’t have a ton of experience, who are just emerging in the field, and it also gives composers who are more established the opportunity to work with amazing musicians, which I think is rare with both those groups. I also try to have the concerts out in the community to raise awareness of the art form and raise an appreciation for what we do.

WHAT HAS BEEN THE BIGGEST CHALLENGE?
Funding. Nobody would touch us the first two years we existed, so that was all my money. And I had no job, really. It was super stressful. I mean I literally cried, bled, and sweated over the festival.

I’ve written several grant requests. We usually get support from a regional foundation based in Atlanta. The past two years we’ve received some funding from the Knight Foundation. If we had more funding, we could do more. I would like to pay my musicians more, my guest composers more.

Venues have always been a huge challenge. It takes a lot of work. Some people are not really open to what we do, so they are skeptical and reluctant to have us there. Some cancel at the last minute. And the venues cost money, too. Describe the composers’ workshop: Composers who apply will select whether they want to go the straight composer route or the electronic music route or the dance composer route. The festival is two weeks.

Everybody has a piece professionally performed and makes professional recordings for audio and video, as well— things they can walk away with and have for their portfolios. Having super-stellar musicians is key. Some of these concerts are like the best chamber music concerts I’ve ever been to in my life. I’m extremely proud of that. The violinist of the Beo Quartet says that the festival is like a boot camp for their quartet. I’ve never seen a string quartet that’s this amazing. They are a mean machine. And they’ve gotten a ton of jobs through our festival and through the guest artists we bring and the relationships that develop.

AND THE PROGRAM HAS TRIPLED IN SIZE IN FIVE YEARS ...
I didn’t realize how much of a need there was for this kind of thing. We’ve had composers from every continent except Antarctica attend our festival, and it’s a pretty exciting concept that we have had that big of an effect. We have to go through at least 100 applications.

We really try to make things that will open other opportunities, and it’s amazing because it has. We’ve had a couple of hundred composers who have done this program now, and pieces that they’ve written for the festival have won awards and have opened up so many other opportunities. It’s so rewarding to hear about. And people have maintained these networks in this community we’ve built. People help each other; they’re still collaborating. I was not expecting that side effect. It’s one of the greatest things about this project.

We’ve expanded now to offer a competition for writing a string quartet or a saxophone quartet, for composers ages 35 and up. Opportunities for that age group are extremely rare. We’ve had an overwhelmingly appreciative response for that, as well. The winners come and contribute a lot to the festival. And it helps elevate the status of the festival and raise awareness of the ensembles that are doing the recordings.

WHAT HAS BEEN THE RESPONSE FROM THE CHARLOTTE COMMUNITY?
For the most part, people seem really enthusiastic about what we present. Sometimes it can be a little experimental or avant-garde—and we are stretching some people, but most of the music does not really stretch what they’re comfortable with. A lot of people say that they’re glad that something like this exists— maybe they used to live in New York or Boston and they never thought something like this would happen here, and they’re really excited.

I live here and work here, and my family is here. So, I really wanted to create something that would eventually grow in 20 years. I’ve seen it change already, and collaboration—among all kinds of musicians and even different genres—is the key to making this the most accessible to as many different kinds of audiences as possible.

SO WHAT ARE YOUR 20-YEAR HOPES FOR THE CHARLOTTE NEW MUSIC FESTIVAL?
This last festival was the first one that I didn’t say I was never going to do it again (laughs).

And maybe even—who knows?—a Center for New Music, where composers can have a work space and share hardware and software—a collective composer workspace. We could get some really big-name people in and put Charlotte on the map for contemporary music. And I think it could also include jazz— anything that’s artistic and demonstrates good craftsmanship.

LESSONS LEARNED?
I had no idea what I was doing at all. I had no idea what it would take. I had never even been to a workshop like this. The funny part is, everybody told me it wasn’t going to happen. My parents were the only people who didn’t—they were supportive, whatever happened. Even my professors said, “you know it’s a big project, don’t worry if it doesn’t happen.” But it never occurred to me that it wouldn’t happen, that I wouldn’t make it work. It proved to me personally that you really can do anything you want, as long as you take every single stupid little step to get there. As long as you’re willing to sacrifice, you can pretty much do anything you set your mind to doing. I had never had anything that taught me that quite to that extent before.

It really takes five years to make nothing into a thing, five years to get it out of the grave. That was a big learning experience for me, too.

I don’t know if I would have done it if I’d known everything I was going to go through and have to deal with and have to sacrifice. Most of the time I’m glad I did it (laughs)—actually all the time. But sometimes, I’m a little tired!