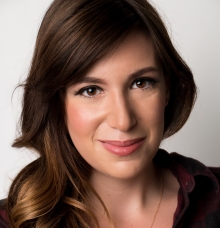 Laura London Waringer (Laura Hope-London) is an actor, director, writer, producer, and theatre academic who joined the UNC Charlotte Department of Theatre faculty in 2019. She holds a BFA in Musical Theatre from New York University (NYU) Tisch School of the Arts and an MFA in Music Theatre from the Royal Central School of Speech and Drama in London. She is a member of the Actors Equity Association (AEA), British Actors Equity, and SAG-AFTRA.

Waringer was the winner of Best Screenplay Pitch at the 2013 Raindance Film Festival. She has written and produced and co-starred in two short films, Homeward and Departures, and is currently developing a feature. She is also the co-Executive Producer of the Award-Winning web series, Seeking, which recently launched its second season.

Waringer is the artistic director of Wanderlust: Theatre on Location, an immersive musical theatre company that stages musicals “on location” at site-specific venues across the country. She conceived and directed their premiere production, Musicals on the Move, a walking musical theatre experience that staged numbers from beloved musicals at show-specific venues and business across midtown Tallahassee, Florida. The company also created a commissioned, immersive adaptation of A Christmas Carol for Thomasville, Georgia's famed Victorian Christmas Festival. Wanderlust is currently in production for The Frenchtown Project, an auditory, social-distant musical theatre experience that chronicles and celebrates the rich history of Frenchtown, Florida's oldest Black neighborhood. The company is also developing an original new musical about feminist folk artist Laura Popes Forester, which will be performed on location at her former home the Popes Museum in Cairo, Georgia.

In addition to her artistic work, she is currently finishing her Ph.D. from Florida State University School of Theatre. Her dissertation, titled Triple Threat: A Study of American Musical Theatre Training, explores the history, growth, ethics, and progression of BFA musical theatre programs in the United States. Her other research interests include race and gender representation in musical theatre and musical adaptation of historic events. Her published work on Beyoncé appears in the book Queen Mothers: Articulating the Spirit of Black Women Teacher-Leaders. Forthcoming publications include a chapter in the books Hamilton: History and Hip-Hop - Essays on an American Musical, due to print in 2021.