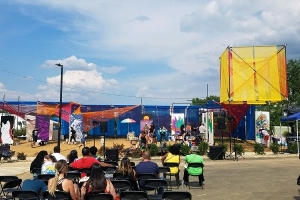 After more than a year of work, architecture students taught by Professor Marc Manack have completed a magnificent installation at the new Trailhead Arts District. ⁠⁠

The area at the Sugar Creek LYNX Blue Line Station is being developed by Flywheel Group,  led by School of Architecture alumnus Tony Kuhn. Kuhn received his Master of Architecture in 2007 and founded Flywheel Group in 2013. Anchoring the Trailhead Arts District are the Charlotte Art League and the new Independent Picture House.

In late 2020, Kuhn and College of Arts + Architecture Director of Collaborative Works Wendy Fishman discussed inviting students to design an outdoor structure as a beacon for the Trailhead project.

“The project came from the idea that the university should be more visible in the community,” Kuhn said. “As a graduate, I know how great the program is and want to see more interaction and visibility with the community.”

Fishman tapped Manack, who has led students in other design/build projects in recent years through his “Good Fast Cheap” studio. A partnership in 2019 with AIA Charlotte and the West Side Community Land Trust resulted in The People’s Porch, a public gathering space on Charlotte’s west side. This past academic year, Manack’s students designed and installed a play structure for the Coulwood Hills Neighborhood Park in northwest Charlotte.

In the Spring 2021 semester, students in Manack’s second year undergraduate architecture studio began the process of imagining what the space at Trailhead could be, meeting with Kuhn to brainstorm ideas. Then last summer, the students in Manack’s "Meta Design Build" graduate studios designed the pavilion installation.

The final design resulted in a pipe scaffolding wrapped with colorful ropes. After some prototyping in the Storrs Salon, on-site construction began in July 2021 and, occasionally delayed by construction activities at the site and supply chain issues, continued until this June. Flywheel Group financed the construction materials – at just over $30,000.

“On a fundamental level, being an architecture student and designing something with a group of people, then seeing it become a reality in the physical world is the greatest thing,” says Nick Sturm, who continued to work on the project after graduating this past May. “It’s a pretty cool thing that we made out there. I think everybody felt the satisfaction of being able to work together in a team to make it happen.”

Manack says that the installation – with its tower, corridors, galleries, and courtyard – serves three functions.

“It is a beacon to draw people to the site. It’s also a gateway from the cross-Charlotte trail to the building. And the third thing is that it is a backdrop, a scaffold, for performances and exhibitions.”

The pavilion celebrated its “grand opening” on June 11 at Charlotte Edge Fest, presented by the Charlotte Art League, with live mural painting, musicians, skaters, and other activities.

Kuhn says he loves the result and looks forward to seeing more student work in the community. “We’ll do what we can to support.”