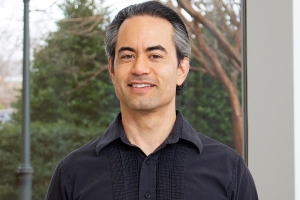 Dr. Brian Arreola will perform the lead tenor role of "Yoshizo" in the Japanese opera Hebionna (Snake Woman) by Asako Hirabayashi. The opera will receive its world premiere on June 27 in a production in Rowe Recital Hall and will be filmed for future distribution. The performance is the latest project in Arreola’s ongoing creative research of music by Asian and Asian-American composers.

“Asako Hirabayashi and I have been collaborating on opera and art song projects for nearly a decade,” Arreola says. “In 2014 she invited me to participate in workshop performances of her first opera, Yukionna, with Nautilus Music Theater in Saint Paul, Minnesota. Then, in 2017, I commissioned her to create an art song setting of the Japanese folk tale ‘The Boy Who Drew Cats,’ which became the title track of my Albany Records CD of art songs by Asian and Asian-American composers. And now we are creating a film of her newest opera, Hebionna.”

Hirabayashi is a Japanese composer and harpsichordist based in Minneapolis. She has won numerous composition grants and awards, including a 2016 McKnight Fellowship for Composers, several first prizes in the Alienor International Harpsichord Composition Competition (6th, 7th and 8th consecutively), and the NHK International Song Writing Competition in Japan. She was awarded the 2012 Jerome Fund for New Music by the American Composers Forum to write her first concert opera, Yukionna (Snow Witch), and a 2019 Schubert Club Composer’s Award and 2021 Opera America Discovery Grant for the creation of Hebionna.

Arreola calls Hebionna “a fascinating mashup of Japanese folklore/mythology and modern-day eco-disaster cautionary tales.” Sung in Japanese it tells of a snake who is saved from a trap by a poor woodcutter. The snake becomes a beautiful young woman, and they fall in love and raise a child together.

“The villagers abhor the young family as unnatural, and kill them,” Arreola recounts. “The killing sets off an ecological disaster when all the snakes leave the area, and the villagers must atone to allow nature to heal itself and them.”

Arreola, who is Filipino-American, is Professor of Voice & Opera Workshop in the Department of Music. In 2016, he brought together UNC Charlotte faculty and guest artists to perform art songs by Asian and Asian-American composers in a Faculty & Friends Concert on campus. That music was later recorded and issued on a CD by Albany Records.

“The composer and librettist, husband and wife team P.Q. Phan and Anvi Hoàng, hope to create a work that will give Asian and Asian-American opera singers opportunities to create nuanced, fully human characters, as a way to balance opera's long history of eroticizing the ‘Oriental other,’ Arreola said at the time. “As an Asian-American singer I am thrilled to be able to take part in the first performance of this work. I believe Phan's music, and his multicultural approach, represents the way forward in opera, classical music, and the arts.”