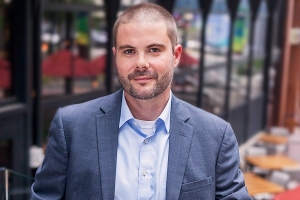 Now in its 29th year, the “40 Under 40” is the Charlotte Business Journal’s “signature awards program” and recognizes members of the local community who are under the age of 40 and have already made a significant mark in their careers. Honorees are selected for their business success, community involvement, leadership ability, and influence on the region, public policy, and quality of life.

The son of an architect/engineer, Patrick came to UNC Charlotte from Greensboro, where he graduated from Western Guilford High School.

“UNC Charlotte taught me how to draw,” he says. “When I applied, I had worked with my hands a lot, building furniture and doing construction projects. Learning to draw opened up so much in my mind.”

He also was introduced to what was then the new field of digital fabrication. “At the time, UNC Charlotte was at the forefront of laser cutters and water-jet cutting,” he says. “If you looked at NC State and Clemson, they were very behind.” 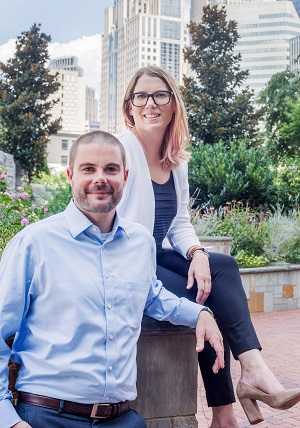 While an architecture student, Patrick interned at Gantt Huberman Architects and after graduating worked at the firm for eight years – taking off one year to return to his alma mater to complete his professional degree. After a short stint at LS3P, he founded biloba in 2015. His wife Erin, who earned her Master of Architecture from UNC Charlotte in 2008 (they met in a class and married in 2011), joined biloba as partner in 2017.

“Ian has just really built this from ground zero,” she says. “We’ve done it together, but he really started it and got it going.”

Patrick had focused on higher education projects at both Gantt Huberman and LS3P, and that sector has been prominent in biloba’s portfolio, which includes projects at Appalachian State University, A & T State University, UNC Greensboro, Western Carolina, Winston-Salem State, and UNC Pembroke. The Patricks have also completed some UNC Charlotte projects – both at The Dubois Center at UNC Charlotte Center City and the main campus, where they redesigned the Starbucks in the Popp Martin Student Union and, forthcoming this summer, the coffee shop in Atkins Library.

Patrick is a member of the American Institute of Architects (AIA), United States Green Building Council, Construction Professionals Network (CPN), and the Commercial Real Estate Developers Association (NAIOP). He has served on the AIA’s Legislative Review Committee, was past Co-Chair of the USGBC Charlotte Board of Directors, Chair of the USGBC’s Membership and Outreach Committee, and recently completed his tenure on the board of directors for CPN NC. With CPNI, the non-profit arm of CPN, he has volunteered in rural towns to help town leadership identify design projects that could spur economic development.

“It was clear, even this far inland and far above sea level, that the storm had been devastating,” he later wrote. “But it didn’t prepare me for the things I saw in the coming days… Some of the roads were still impassible and the homes still underwater. We would have to come back for those when the waters receded. But the roads that were passable all told the same story: the floodwaters had been inside. Couches, insulation, carpet, duct work, and anything that held water, were piled outside in the yard – useless.”

The Patricks chose to name their firm after the ginkgo biloba tree, with its bi-lobed leaves, to represent their partnership. But the distinctive leaf is a metaphor for other pairings that are central to their work and values, recognized in Ian Patrick’s “40 Under 40” award: creative spark and intellectual rigor, service to the industry and service to community, business success and design excellence.