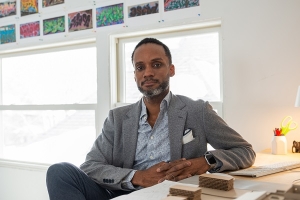 Monday, February 14, 2022
Sekou Cooke STUDIO is one of eight recipients of recognition for distinct design voices.

Master of Urban Design Director Sekou Cooke’s studio has been named a 2022 Emerging Voice by the Architectural League of New York, an annual juried award that recognizes North American individuals and firms “with distinct design voices that have the potential to influence the disciplines of architecture, landscape architecture, and urban design,” the announcement states. Sekou Cooke STUDIO is one of eight award recipients this year.

Cooke founded his studio in 2008, and the design work the studio produces is focused on the exploration of Hip-Hop Architecture, “an approach to contemporary design that embraces hip-hop culture and applies its shape, structure, and ideologies to the built environment,” he describes. The studio’s projects include public, nonprofit, and residential projects, as well as temporary installations and speculative designs.

In January, Cooke was one of 18 architects and designers nationally to be interviewed by Architect Magazine about hopes and fears for the design world in 2022.