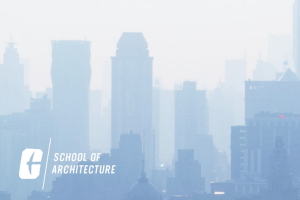 February 10, 2023 - 12:30 PM
Charles C. Hight Architecture Library in Storrs Hall
The SoA Colloquium Series consists of informal presentations by School of Architecture faculty members occurring in parallel with the 2022-2023 lecture series “Curated Urbanisms in a Drawdown.” Faculty will share recently completed and/or in-process work related to the themes of climate, cities, and society, followed by an open conversation.
All events are free and open to the public, and will take place in the Charles C. Hight Architecture Library in Storrs Hall with a Zoom simulcast. Seating will be limited to the first 30 attendees. All lectures will begin at 12:30 pm EST—please check the SoA Calendar for more details.
Chris Jarrett is Professor of Architecture, Co-Director of the designLAB and President of the Architectural Research Centers Consortium (ARCC). From 2009-2019, he served as Founding Director of the School of Architecture. He holds a Master of Science in Architecture from Columbia University and a Bachelor of Architecture from the University of Oregon. His research focuses on the mutually constructed relationship between environment and culture. He is author of numerous papers and presentations, including Intricate Compatibility: Study of a Hillside Lot in Tokyo (2021), Alexander Houses x7: Steel Prefab in the Low Desert (2018), New Housing Ecologies: Compact Spatial Ordering Systems to Support Sustainability (2014), Incremental Initiatives: Global Programming x6 (2014), Sustainable Design Revisited: Building Sound Neighborhood Green Strategies (2011), PowerHouse (2009), Eco-Transit at Hulsey Yards (2005), and Social Practice: Design Education and Everyday Life (2000). His research and pedagogical collaborations have been presented in 29 countries. His work has been published in Architecture, Progressive Architecture, Detail(Germany), On Diseno (Spain), Laras (Indonesia), JA (Japan), the Discovery Channel, CBS News, CNN and the Los Angeles Times. He is currently working on two books: Architecture, Culture and Environment and Akihisa Hirata: Living with Nature. He has received grants from the US Department of Energy, US Department of Education, and the Graham Foundation for Advanced Studies in the Fine Arts. He has secured extramural funding in excess of $1,000,000 in support of his collaborative research and multi-disciplinary design-build projects from The Southern Company, Green Habitats Foundation, Aloca, BP Solar, Beazer Homes, SunPower, Ingersoll Rand, Electrolux, and Home Depot. He has won several design awards from the AIA and ACSA, as well as First Place in the Shinkenchiku-Sha International Design Competition, sponsored by the Central Glass Company in Tokyo; Second Prize in the New York Affordable Housing Challenge; Merit Award from AIA North Carolina for Urban Housing: Design Ideas Competition; Second Place in the House for the Next Millennium Competition sponsored by the Contemporary Arts Center in Cincinnati; and a Young California Architect's Award from the Architectural Foundation of San Francisco, among others. He has been part of two award-winning US Department of Energy Solar Decathlon teams and was U.S. Director of the International Architectural Educational Exchange (IAEE), a global cities initiative jointly funded by the US Department of Education and the European Union. He led the 2007 Solar Decathlon Project for Georgia Tech, which received the BP Solar Award for Innovation and an AIA/Atlanta COTE Award. He was co-curator of Terrain Vague: Photography, Architecture, and the Post-Industrial Landscape, an exhibit of contemporary urban landscape photographers at the Heinz Architectural Center, Carnegie Museum of Art, and the Atlanta Contemporary Art Center. He has organized numerous symposia, panels and events and served as Chair of The Visibility of Research (2013), a three-day, peer-reviewed national conference on architectural research. His teaching engages a range of polemical ideas in environmental theory and practice, including urban ecocriticism, environmental art, post-modern environmentalism, green tectonics, and new media + ecology. He is past-recipient of the Outstanding Teacher Award in the College of Architecture at Georgia Tech. He currently teaches the Graduate Diploma Studio, an undergraduate liberal studies course in arts and society, an elective on Japanese Concepts of Space and a summer study abroad program in Tokyo, that have included collaborations with SANAA and faculty and students from Fukuoka University and Meiji University. He has previously taught at the Georgia Institute of Technology, Ecole Nationale Superiure d’Architecture de Paris La Villette, and the University of Southern California.

Peter Wong is an Associate Professor of Architecture at the University of North Carolina-Charlotte, where he has taught architectural design, history, and theory since 1988. His scholarly efforts include a translation of Vittorio Gregotti’s treatise, Inside Architecture (w/ Francesca Zaccheo, MIT, 1996) and a study of Shanghai shikumen housing in the article “Chinese Puzzle” published in Diversity and Design (Routledge, 2015). These written projects draw from research exploring urban housing, 1950s and 60s building culture, and the experience and meaning of contemporary architectural space. His current research investigates spatial perception in domestic interior realms, utilizing eye-tracking hardware and software to reveal areas of visual attention in housing environments. This work is performed as an interdisciplinary project with colleagues from the Department of Computer Science at UNC Charlotte.

Peter received his degrees from the University of Washington (BA 1981) and the University of Pennsylvania (MArch 1985), and is a licensed architect in the states of Pennsylvania and North Carolina. He has received design awards from the National Organization of Minority Architects (NOMA) and the Charlotte Chapter of the AIA. Currently he directs the School’s undergraduate third year design core and offers advanced social housing studios at the masters level. He has taught and led numerous study abroad programs in Italy, Spain, and China.